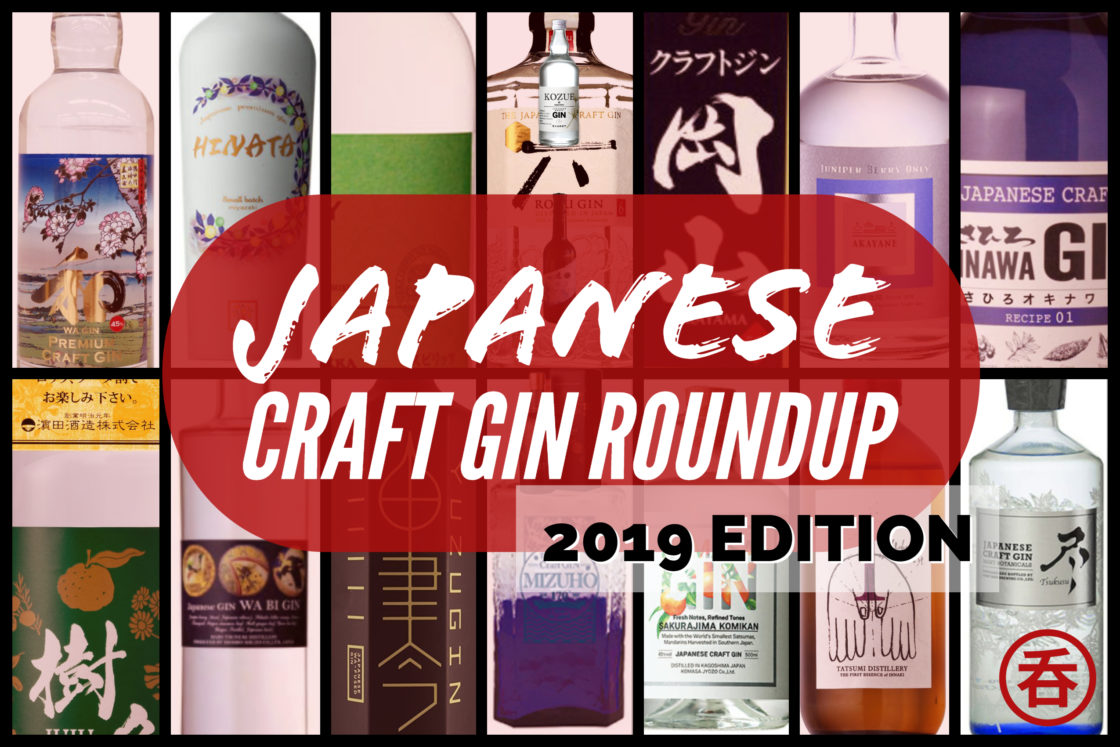 Throughout 2019, Japan has continued to demonstrate a love for creating craft gin! There have been so many new releases since the last time we did a roundup back in June 2018, so it's time for a refresh. By popular demand, here's the latest list of all the Japanese craft gins we know about!

Ki No Bi by The Kyoto Distillery

This is the one that started it all! First released in August 2016, Ki No Bi gin uses 11 different botanicals including hinoki, yuzu, sansho, ginger, bamboo leaves, and Gyokuro green tea. While nodding in respect to Kyoto's tradition of craftsmanship, the team led by Alex Davies is constantly innovating, with new expressions like Ki No Tea, Ki No Bi "Sei," and Edition K, and Kin no Jyu. As Japan's first craft gin, Ki No Bi has set the trend of utilizing local ingredients to really emphasize the Japanese nature of their gin.

Nikka Whisky makes the Nikka Coffey Gin at their Miyagikyo Distillery in Miyagi Prefecture. Sansho, citrus such as yuzu, then juniper, are each steeped prior to being individually distilled on Nikka's old-fashioned Coffey gin. The results are blended with corn and malt distillate, producing a sansho-lover's dream that goes great in a Gin & Tonic.

With a history of making gin going back to 1936, Suntory's craft gin Roku Gin was released to much fanfare mid-2017. "Roku" is Japanese for six, signifying the six botanicals that encompass a full year of Japan's seasons: sakura flower, sakura leaf, sencha, Gyokuro green tea, sansho, and yuzu. These six are combined with eight more traditional gin botanicals such as juniper berry, cardamom seed, cinnamon, and lemon peel. Even the bottle is hexagonal!

One of Japan's few distilleries located within a public park, Hokkaido Liberty Whisky's Benizakura Distillery launched their craft gin 9148 in early 2018. They are constantly releasing new batches that feature As of this writing sales are still limited to the distillery itself and select shops in the city of Sapporo, but a few bottles have found their way into the Tokyo area. The name "9148" is a homage to George Orwell's 1984, where protagonist Winston Smith is forced to drink terrible medicine-like gin under the oppression of Big Brother. 9148 instead values liberty in the world, in values, and in ideas. And they've certainly taken some liberties with their botanicals! You'll find local ingredients like kombu, daikon, and shiitake all in the botanical basket.

In late 2018, they also added Juju Plum Blossom to their lineup.

Kozue and Kodachi by Nakano Biochemical

Pine needles! That's one of the primary botanicals you'll find in Nakano BC's Kozue Japanese Craft Gin from their Fujishiro Distillery. Super smooth, other local botanicals include mandarin peel and yuzu, all sourced from Wakayama Prefecture. If you're into earthy, green notes in your gin, this one is definitely worth a try.

In early 2019 the company also added an expression called Kodachi with the primary botanicals being cedar and cypress.

Clearly leaning on yuzu as its main botanical, the Miyazaki-made Yuzugin also contains 8 other botanicals like ginger, hyuganatsu, cucumber, and coriander seeds. It's made through the marriage of a traditional sake brewing technique (simultaneous saccharification and fermentation, SSF) with a new-age low-temperature distillation at 100°C in order demonstrate the breakthroughs that shochu makers have made over the centuries.

While they may be better known for their Mars Whisky brand, Hombo Shuzo makes the "Wa Bi Gin" at the Mars Tsunuki Distillery. The botanical basket includes citrus such as Kagoshima-grown kumquat, yuzu, paired with cinnamon, ginger, shiso, and other spices. That's later blended with gin's traditional juniper in a koji-based spirit to yield a complex gin with plenty of depth.

The first gin from Okinawa was Masahiro Distillery's Masahiro Okinawa Gin Recipe 01. It's a quite Awamori-heavy gin that uses tropical botanicals like shequasar, goya, hibiscus, and Balinese long pepper.

An ambitious gin from sake maker Tochigi Prefecture's Meiri Shurui, Wa Gin uses a sake-based spirit that's aged for then years, giving them a very smooth platform to work from. They add 7 botanicals such as juniper, orange peel, and lemon peel, making this a more traditional gin that works well in gimlets, Singapore Slings, Martinis, and of course G&Ts.

Okinawa's latest awamori distillery to release a craft gin is Mizuho Shuzo, which also happens to be one of the island's oldest distilleries. It dates back to 1848, before Okinawa was even officially annexed by Japan! Dubbed simply "Craft Gin Mizuho," Tropical and Fresh varieties are available, where Tropical leans on botanicals like pineapple peel, peach leaf, and citrus, and Fresh features juniper, coriander seed, and lemongrass. In the initial run, only 250 bottles of each are available.

Shortly after the release of Mizuho, the company followed up with Ori-Gin 1848, with even more tropical botanicals like peach pineapple.

AWA GIN is Shikoku's only craft gin at the moment, and also one of the few that uses Japanese juniper berries. Only available in extremely limited quantities (think under 100 bottles), other botanicals include yuzu, sudachi, and awa bancha.

At the moment Craft Gin Okayama is Japan's only regularly available cask-matured craft gin. It's finished in Japanese oak ex-shochu casks after distillation. Using a soft rice shochu as a base, Miyashita Shuzo adds 10 botanicals such as juniper, malt, lavender, and even hops to yield a strong (50% abv) gin with a slightly golden tint.

Chugoku Jozo has historically been a somewhat controversial player in the Japanese whisky scene, as they imported grain whisky from Scotland & Canada, aged it in Japan, then released it as Togouchi "Japanese whisky." That all changed last year when they announced the opening of the Sakurao Distillery to begin distilling their own spirits. (Actual) Japanese whisky is an eventual goal, but in the meantime they've released two Sakurao Gins: Original and Limited.

Original has 9 botanicals sourced entirely from Hiroshima Prefecture such as hinoki, green tea, orange, and ginger. Limited then goes further by adding some truly unique Hiroshima botanicals like oyster, wasabi, and spicebush, for a total of 17, the most of any Japanese craft gin!

Summer 2018 also saw the release of the Hamagou Limited Edition, utilizing the flowers from Hiroshima's sacred island of Miyajima.

Sata Souji Shoten has been making craft spirits for several years, but it wasn't until December 2017 that they unveiled their first craft gin. That one used only a single botanical: juniper. It was soon followed up by Akayane Craft Gin Heart (Haru), the first springtime seasonal release that adds botanicals like yuzu, cherry blossom, sansho, and kombu. Over 2018 they released expressions covering other seasons as well! If you're looking for a way to capture the essence of a single Japanese season in a bottle of gin, this is your best option.

This is perhaps the most craft of all the Japanese craft gins in this list. Each batch is handmade by Tatsumi-san--all alone--in his namesake distillery deep in the mountains of Gifu. Water is sourced from the pristine springs of Gujo Hachiman. Fewer than 500 bottles of his gin are released per batch, with each batch bringing new flavor profiles and discoveries. The latest is First Essence Alchemiae Gin Lot2, using a base of sake lees shochu + chicory shochu and juniper as the sole botanical.

Hinata, Japanese for "in the sun," was released in late summer 2018 from the makers of the above-mentioned Yuzugin. The botanicals are drastically more floral, herbal, and vegetative on this one. Fantastic!

Though originally a shochu distiller, Komasa is making a big name for themselves in both the Japanese craft gin and craft whisky categories. Their craft gin, distilled at their Hioki Distillery, focuses on the citrus notes of mandarins from Kagoshima's island of Sakurajima.

Komasa Gin is the main brand, but they have also done a limited release of bottles with the Hioki Gin brand.

Yomeishu is famous for their herbal remedy liqueur, but they released their first Japanese craft gin in early 2019. Its focus is on a unique botanical called kuromoji that has been used in Japan for centuries as an aromatic. I found it to be pretty awesome with a great blend of greenery and spice!

Oenon is one of Japan's larger alcohol makers, with major brands including Tankatan shiso shochu and Denki Bran being just two in their big portfolio.

In late 2018 and early 2019 they entered the Japanese craft gin world with not one but three different craft gins, each focusing on different botanicals and made at one of their many distilleries.

Kitasuisho is the first, with Hokkaido botanicals like apple mint, red shiso, and Irish cobbler potato.

The next gin from Oenon is Akita Craft Bi Gin. This one features Akita-born botanicals of fuki, artichoke, and Akita rice.

The name of the gin is a play on the phrase Akita bijin, or "Akita beauty," as the area is historically famous for having beautiful women. Recent examples include Nozomi Sasaki and Mitsu Dan.

Oenon's third craft gin dubbed "Mumei" hails from the Tokyo-adjacent Chiba prefecture, though it uses a base of shochu from Fukuoka. To my knowledge it's the first Japanese craft gin to use hops as a botanical, in addition to more standard ones like coriander, orange peel, and yuzu.

Still very much a "craft" operation, Kikka Gin releases have been limited to only a few hundred bottles at a time. I recently tried Batch 004 and found it to be an excellent blend of citrus and herbal notes.

Kikka Gin is created by a sake maker with a history going back to 1719. It's great to see the expertise cross over!

Kanagawa prefecture, the home of Yokohama, pushed out their own craft gin in late 2018 called Koganei. It too uses local botanicals like kabosu and shonan gold. Unfortunately it's not widely available just yet!

While the above-mentioned Sakurao may be trying to dominate the Seto area's gin scene, they got a new competitor in November 2018 called The Inland Sea Setouchi. Okayama Distillery distills the gin, but importantly, it's being sold at Shinanoya, giving it plenty of exposure here in Tokyo.

Another Kagoshima craft gin is the recently announced Tsukusu. This one features a whopping 24 botanicals like shekwasar and cinnamon, but I also found it interesting that they let the gin sit for 30 days in a tank that contains volcanic rock!

A very recent release from Kagoshima's Ooyama Shinhichi Shoten is Jin7. The botanical bill here consists of 28% juniper, 40% citrus, 13% each of herb 1 and herb 2, then 6% spices. That's a bit surprising since many distilleries don't tell you the exact ratio of the botanicals that go into their gin.

The shochu maker's history goes back to 1875!

I'm not entirely sure Gin Za has been officially released or not, so I'll just list it as a bonus for now. The folks behind the Hobgoblin pubs in Tokyo decided to create their own Japanese craft gins and rum, the former resulting in the "Gin Za" brand. There are two expressions: Gin Za with hops and yuzu ("Japan's first hopped gin"), and Pink Gin Za, adding hibiscus. Looking forward to trying this one!