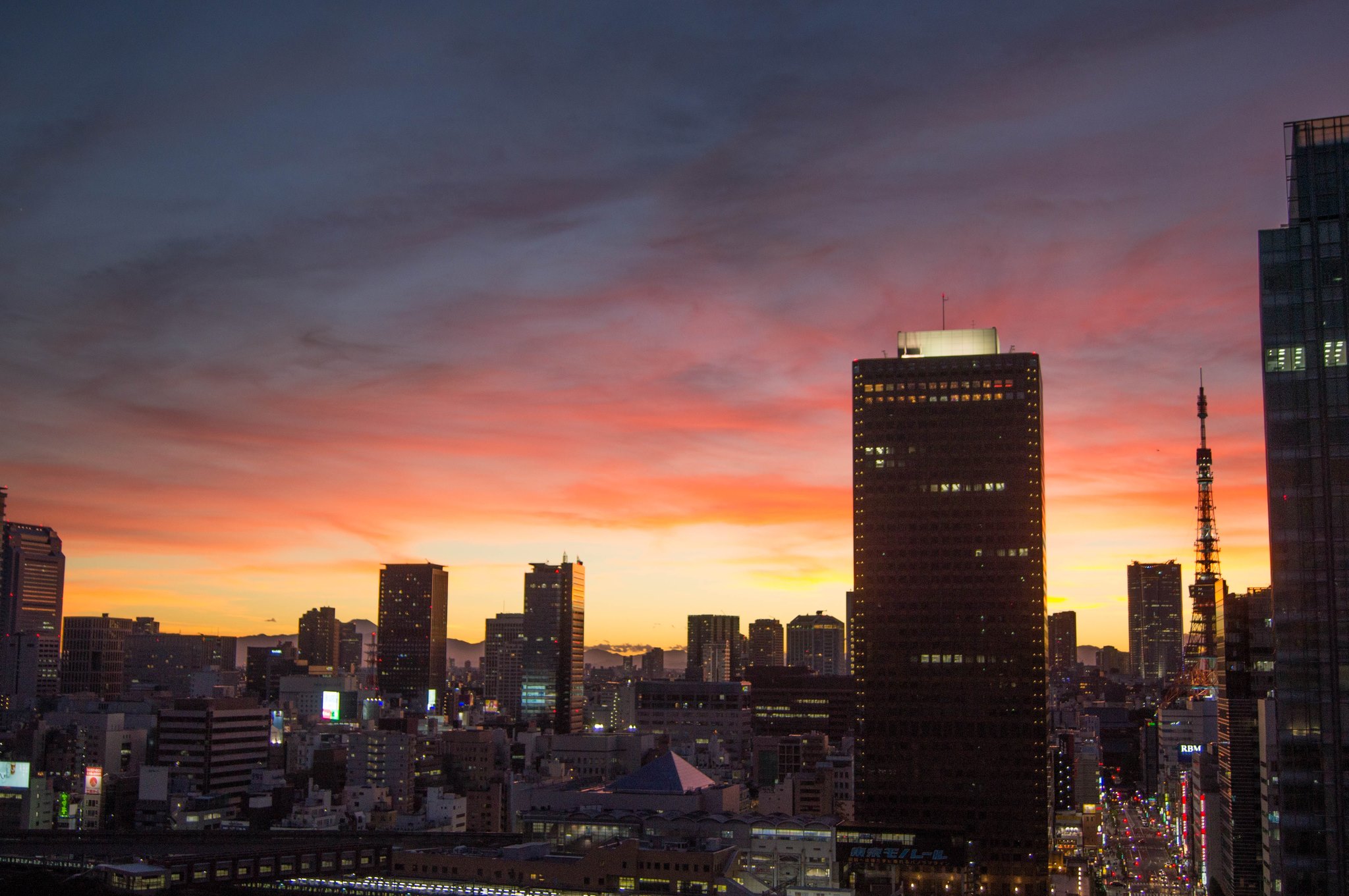 by Whiskey RichardNovember 17, 2018September 25, 2020
IF you’re in Tokyo for business, you’ll probably find yourself invited to drink with colleagues, clients, or suppliers at some point. This guide provides a basic overview of the customers and etiquette associated with Japan’s business drinking culture. The nomikai, or drinking party, is where this usually happens.

This website is of course named nomunication, which is just a combination of the word the Japanese verb nomu–“to drink”—and communication. Nomunication is all about encouraging more open communication between people through the world’s favorite social lubricant: alcohol.

In Japan the word nomunication often describes work-related drinking. A boss needs to tell a subordinate something hard to hear, so they invite him/her out for a few drinks to ease the impact, for example. So although the workday is over, you’ll find that in many cases, work continues even when you’re on your third or fourth (or tenth) drink. These situations, and the related etiquette and customs, will be the focus of this guide.

Put plainly: yes. I’ve spent 10 years in corporate Japan and I can conclude that drinking with colleagues is effectively mandatory. Effectively mandatory — nobody will force you to attend any specific event. But the reality is that many promotions, contracts, and other deals are unofficially finalized only after your colleagues or clients get to know the real you. While attitudes are changing, drinking and Japanese business culture remain inseparable. The senpai-kohai system may be partially responsible, but that’s a different can of worms!

How long and how much?

You may have heard that Japanese salarymen drink a ton, and often get plastered in front of bosses and colleagues. This is also true! 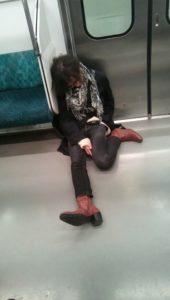 If you’ve received an invitation to a nomikai, block your entire night off. Although the schedule may indicate the dinner runs 7-9PM, there’s usually an afterparty or two. Regardless of when the event starts, it will probably continue until around 11PM or 12AM. Most public transport in Tokyo stops running around 12AM, so people will often drink right up until the last minute.

“How drunk” is of course in the eye of the beholder. You may have even seen pictures of drunk Japanese salarymen. But sleeping is essentially the only public nuisance that Japanese drunks will ever cause. Outside of Japan we have loud drunks, angry drunks, vandal drunks, fighting/violent drunks, sad drunks, musical drunks, “watch this!” drunks, woo girl drunks, buy everyone a shot drunks, shit-talking drunks, philosophical drunks, hungry drunks, sleep on the toilet drunks, police car drunks, and well you get the picture. Japan hasn’t had much experience dealing with anything besides sleeping drunks. It’s entirely on you to drink responsibly, because it’s unlikely anyone will try and stop you. Be realistic about what kind of drunk you are, and take this into consideration as you drink through the night.

Mental preparation done! Now let’s get into the customs and etiquette of the nomikai.

Just to preface any of the customs/etiquette described here: Japanese do not expect non-Japanese to be familiar with their drinking culture. So while this guide does provide advice, don’t sweat the details — it’s we’re here to drink, after all! There really aren’t any drinking faux pas that can’t be forgiven.

To preface the parts of this guide that address customs/etiquette: you don’t have much to worry about. Generally, non-Japanese won’t be expected to know any of what this guide contains. Much (if not all) of it goes out the window after everyone has had a few.

But, better safe than sorry!

Japan has the concept of a kamiza, which roughly translates to “the best seat.” Since there’s a best seat, there’s also a worst seat, and the organizational hierarchy of the people present determines who sits where. As a rule of thumb, the worst seats are closest to the door. Allegedly this tradition goes back to the Sengoku period — warlords were regularly trying to kill each other. Sitting close to the door meant you’d be one of the first to die when your crew assembles in a room.

While it’s certainly no longer a matter of life and death, the best and worst seats in various spaces are as below:

It’s common courtesy to order something that will be served relatively quickly as your first drink. This is because you’re to wait until everyone has a drink before you start. So better to stick with something simple here — we’ll go with beer.

If the beer shows up in a bottle, we’ll need to pour it into everyone else’s glasses.

Pick up the beer with two hands, gripping the bottom with one hand and resting the neck on the fingers of your other hand. The label of the bottle should be pointing skywards. Then make sure everyone gets beer! Start with the most senior person in your immediate area. If you find yourself on the receiving end, you’ll also want to hold your glass with two hands, again gripping with the right and resting on the left-hand fingers, so there’s a very slight tilt to the glass. Once your beer has been poured, be sure to say itadakimasu! 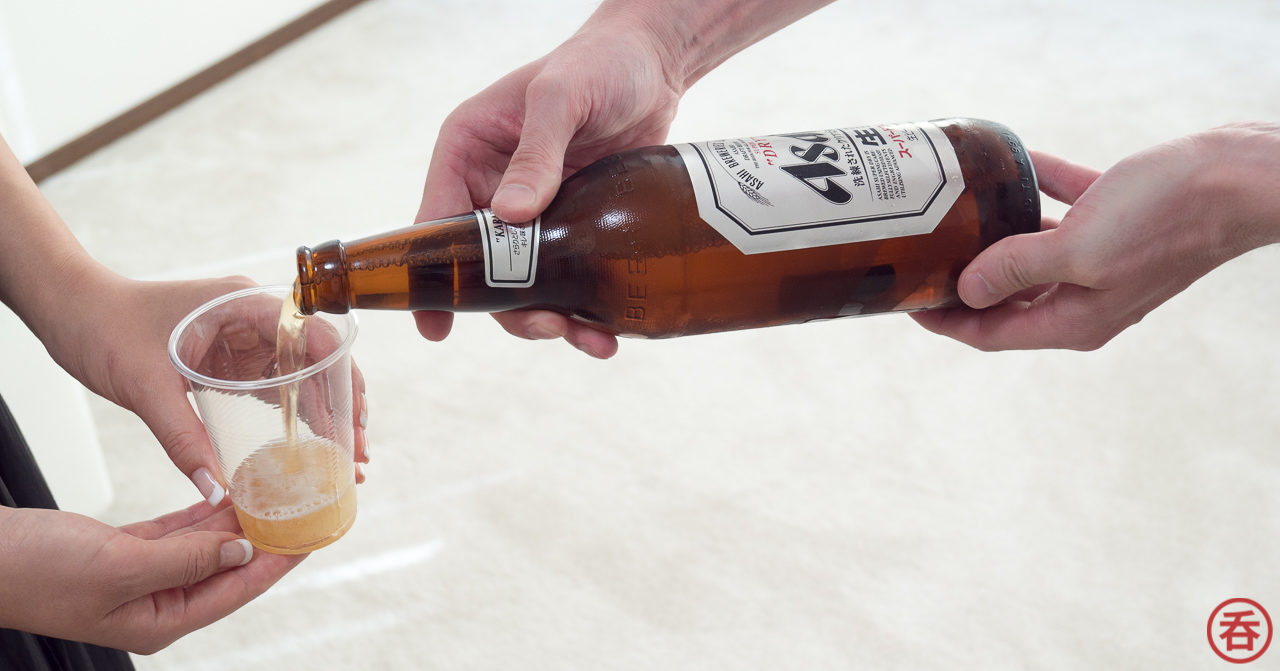 If wine was ordered instead of beer, the staff should handle filling everyone’s first glass.

Someone may or may not say a few words. Perhaps you’ll be asked to introduce yourself. After an enthusiastic kampai!,  when clinking glasses with those around you, it’s courteous to have the lip of your glass slightly lower than that of people more senior than you.

Keep an eye on the glasses of those around you and be proactive about keeping them filled. But obviously don’t mix temperatures — let them finish the entire glass of wine or sake before refilling. Senior members should have their glasses filled first. You may be last in this totem pole! Don’t fill your own glass. Someone should offer to pour your drink for you. It’s courteous to at least take a sip before you put your glass down again.

That may seem like a lose-lose scenario — why can’t everyone just agree to pour for themselves, so nobody has to worry about anyone else? The Japanese term for self-pouring is tejaku (written 手酌) and you very well may hear someone bring this up, maybe in the sentence tejaku deiiyo (手酌でいいよ or “I’ll pour for myself”).

See the Bar Phrasebook for help with the Japanese to use when requesting or paying the bill.

Who pays? If you’re drinking with colleagues, senior members of the group will typically pay for all or a majority of the bill. It may be split the following day, it may not.

For those that plan on expensing all or some of the food/drinks, this is a good time to bring up how receipts work in Japan.

The Japanese word for receipt is レシート (“reshi-to”). Depending on where you’re drinking, this may not be available (see the Tokyo Bar FAQ for more info). So it may not be possible to get an itemized receipt — something to keep in mind if your company requires this. Cocktail bars generally don’t give itemized receipts, but izakaya and restaurants typically do. Also note that it’s best to keep cash handy just in case the place you’re drinking doesn’t accept credit cards, or you’re asked to pay for your portion of the bill on the spot. The concept of splitting the bill across multiple credit cards hasn’t made its way to Japan yet.

Note: if you work for a Japanese company in Japan, it’s likely that they will require a ryōshūsho (領収書) rather than a receipt. This proves that the bill was actually paid, and is almost never itemized. To receive a ryōshūsho you may be asked to provide a company name and address, or asked for a business card.

So you’re all paid up and everyone is ready to head out. But you’re still good for a few more drinks, the night is young, and you want to explore Tokyo. There’s a word for that: nijikai!

In Tokyo bar-hopping is extremely common and you’ll likely go to at least two places on any given night out. In Japanese you use the counter “-jikai” to describe which stage you’re in at the night. Let’s go through each stage:

At some point your night will come to an end. If possible you should familiarize yourself with the below Japanese traditions that signify closing out the night. They can also be used to close out the individual stages described in the previous section of this guide.

This guide may have conveyed the sense that even drinking for business in Japan is very rigid and structured. But that’s certainly not the case — the main purpose is drinking, so you won’t offend anyone by missing any of the above notes.

I hope you have found this guide useful. Please let me know if you have any questions or feedback. If not: kampai!