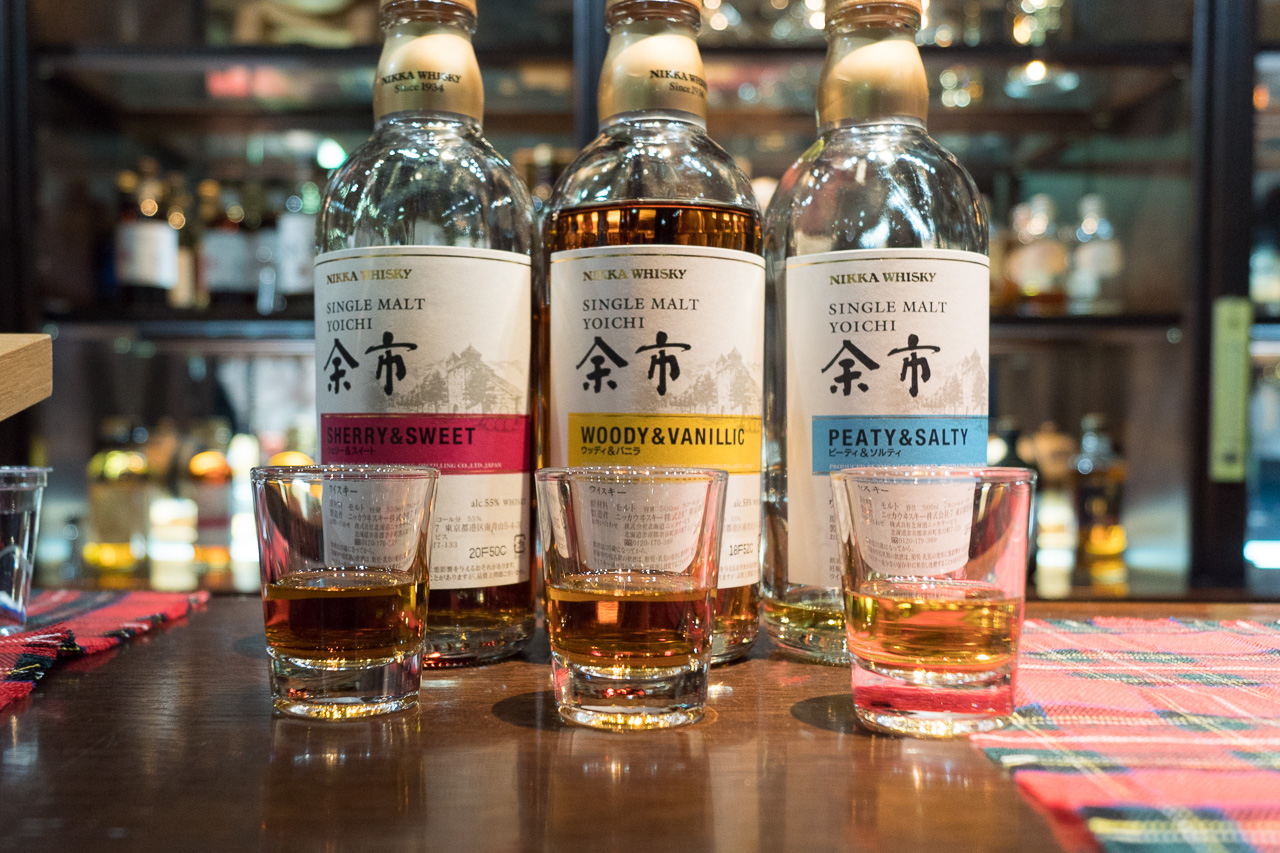 Hokkaido is one of my favorite parts of Japan — I must have been six times now. On my latest trip up to the island, I made a point of taking a side-trip out to Yoichi, home of Nikka Whisky’s Yoichi Distillery. As Taketsuru-san himself would probably prefer, the distillery was blanketed in snow. And plenty more was coming down!

First let’s have a quick look at the town of Yoichi. It’s claim to fame in the Edo Period was being a port city for herring. Later during the Meiji Period, Yoichi was the first place in Japan where farmers were able to successfully cultivate apples. With an average yearly temperature variation of only 9 degrees Celsius, it remains one of the few places in Japan where apples can actually grow year-round. The traditions of fishing and growing fruit of course continue in Yoichi, but what really put it on the map for Hokkaido was being the site chosen by Masataka Taketsuru for his first independent distillery.

Those familiar with Japanese whisky probably recognize the name Taketsuru, since it’s the name on every bottle of the company’s flagship blended malt. Taketsuru-san grew up in a sake-producing family, so presumably alcohol was already a large part of his life from the get-go. He originally intended to take over the reigns of his family’s sake brewery, but his interests turned to whisky, culminating him leaving Japan to study chemistry at University of Glasgow in Scotland (and you can to this day study chemistry). While in Scotland he apprenticed at a whisky distillery and took the craft, as well as a gaijin wife, back to Japan in 1920.

Above I said Yoichi is Taketsuru-san’s first “independent” distillery. While Taketsuru-san was in Scotland, Japan’s other father of Japanese whisky, Shinjiro Torii, also had his own plans. Torii-san already had a successful company known as Kotobukiya, known today as Suntory. Torii-san hired Taketsuru-san and together they went on to establish the Yamazaki Distillery just outside of Osaka. That’s a separate distillery visit…

After several years together, the pair decided to call it a night. Taketsuru-san wanted to make his whisky somewhere that more closely resembled Scotland — and he already had his eye on Hokkaido. After drumming up investor interest from Shotaro Kaga, he established 大日本果汁 Dainipponkaju, selling fruit juice from around 1935. Remember how I said Yoichi was famous for apples? Whisky isn’t something you can just distill and sell immediately; Taketsuru-san’s plan was to sell fruit juice in the meantime. Taking a few kanji from their company’s name, they decided to dub their main apple juice 日果, which reads nikka.

By now it’s 1940. Domestic demand for Japan-made whisky is on the rise since it’s getting harder and harder to import from England due to the Empire of Japan ramping up the war effort. Luckily for Dainipponkaju, commissioned officers at the time received rations of alcohol — so companies like Daipponkaju were given priority access to raw materials like barley. This kept them afloat throughout WW2, and in 1943 Taketsuru-san becomes president of the company. Think of that the next time you drink a Nikka whisky!

Japan of course lost the war and is thrown into the turmoil of Postwar Japan. No more rations are provided to officers. Even so Taketsuru-san, always the purist, is adamant about retaining the quality of his whisky despite the shortage of materials. This eventually brings the company to the brink of failure since their main competitor (the aforementioned Kotobukiya) had already released Tori’s Whisky, a third-rate whisky containing less than 5% of the original distillate. Yikes. But Taketsuru-san doesn’t actually own the company; after a bit of prodding from the main shareholder Shotaro Kaga, Taketsuru-san decides to release his own third-rate whisky. True to form though he makes sure it’s a higher quality product, containing the maximum 5% of the original distillate. They even made their own caramel to use as flavoring. It’s 20% more expensive than Kotobuki’s offering, but at least the company doesn’t tank.

In 1952 the company was officially renamed to Nikka Whisky. A couple years later Kaga-san, death knocking at his door, sells his stake in the company to Asahi Beer. Asahi thus owns over half of Nikka’s stock, meaning Nikka Whisky officially becomes part of the Asahi Group. In terms of ownership this trend continues over several decades and Asahi completes their acquisition of Nikka Whisky in 2001. Yes, today’s Nikka Whisky is a wholly-owned subsidiary of Asahi Holdings. Think of that next time you drink an Asahi!

Yoichi is home to Nikka Whisky’s Yoichi Distillery, one of two places where the company produces single-malt whisky. The other is Miyagikyo Distillery near Sendai. Today’s Yoichi has a population of only around 20,000 people, so by Japanese standards this is a pretty tiny city.

Including the quick change in Otaru, our train ride from Sapporo takes about an hour. The approach takes you along the coast. If you look closely you can see the port and JSDF’s naval base, home of the Coastal Defense Group Yoichi. 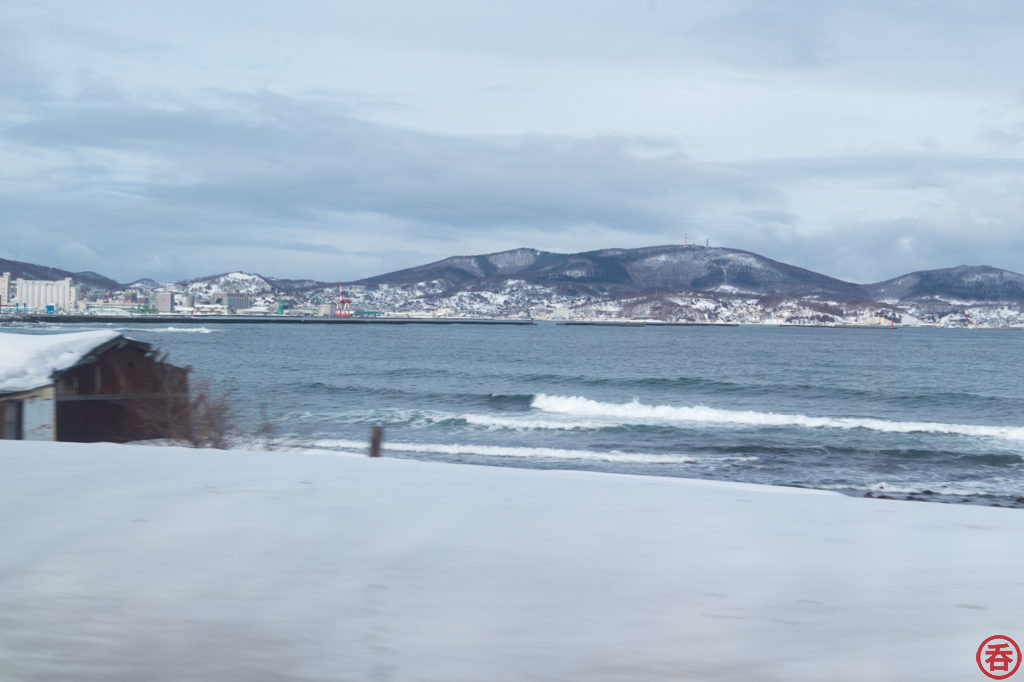 After a 2 minute walk from the station you’ll be greeted with the entrance to the facility. 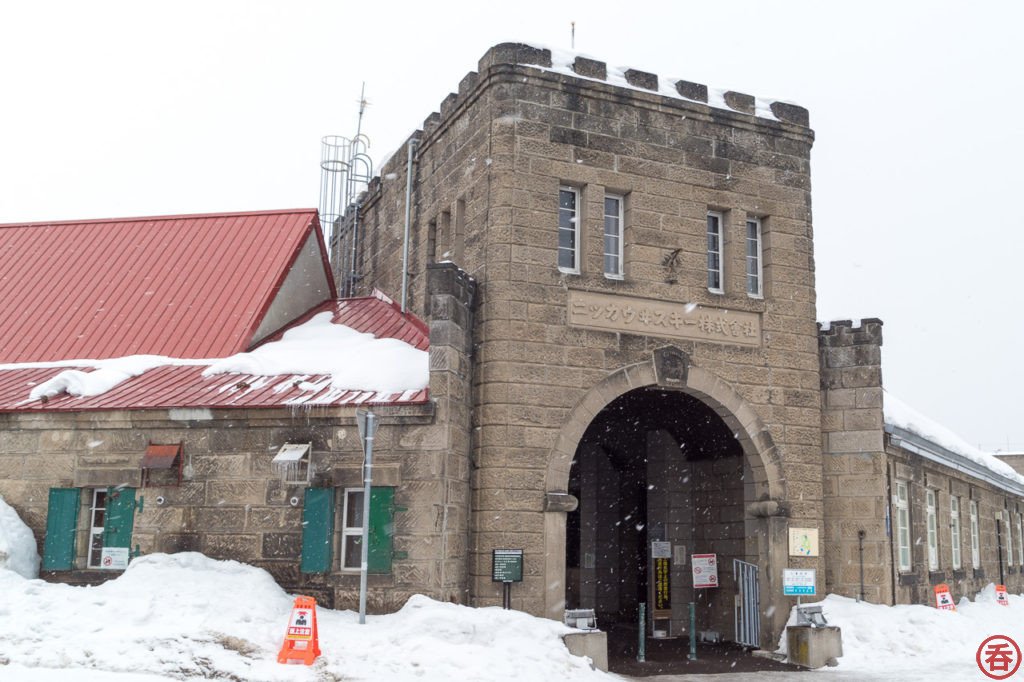 Entry is free and you’ll be given a brochure that with a map and some brief info about each building. In English if you prefer!

You have two options for tours: self-guided or a guided tour conducted in Japanese. I went with self-guided. 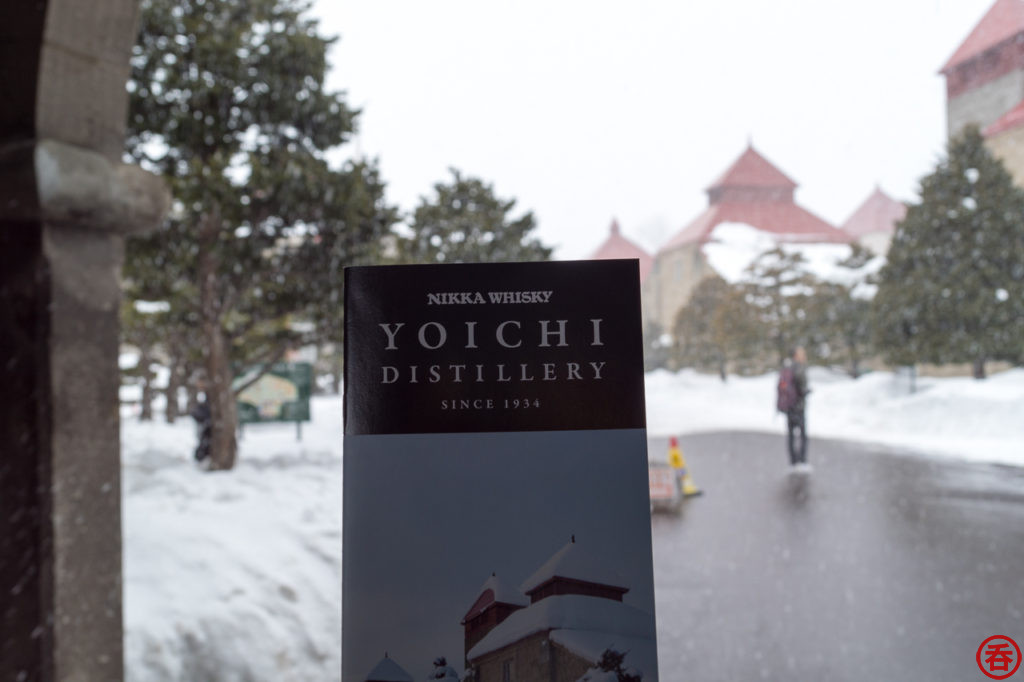 Compared to the Yamazaki or Hakushu distillery tours, Yoichi’s distillery tour has you walking around the complex quite a bit more as there are several different buildings to visit. But it’s worth noting that much of what you see isn’t actually used for producing whisky anymore — that’s actually further back within the property and not open to the public.

Nine of the buildings here are listed as Registered Tangible Cultural Properties by the government of Japan, such as the office building, rackhouse, the stillhouse, and the kilns/drying towers. 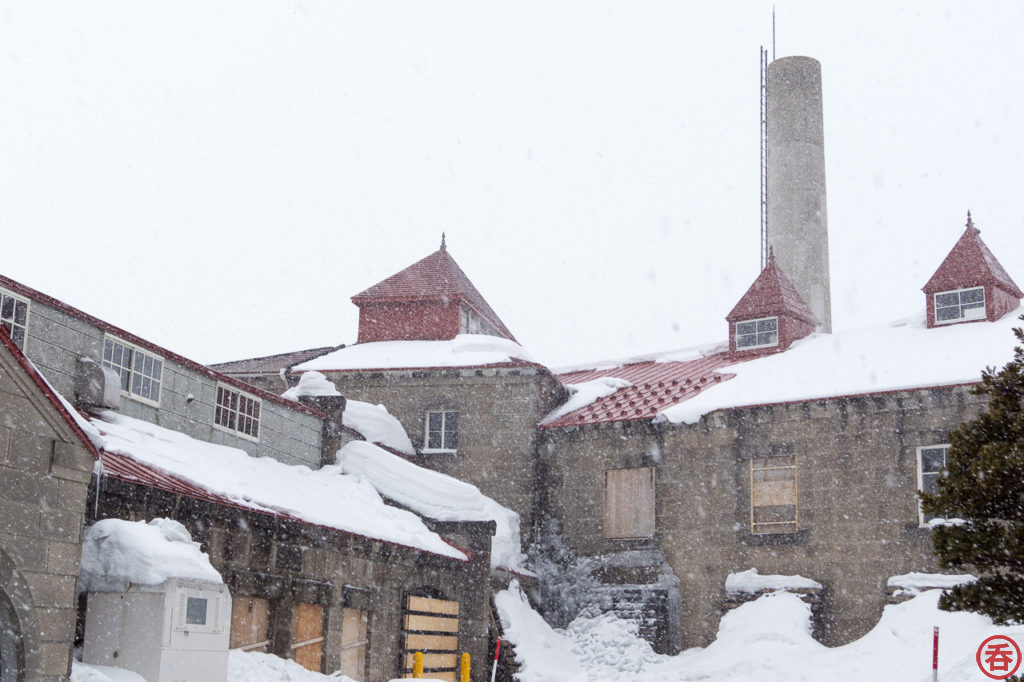 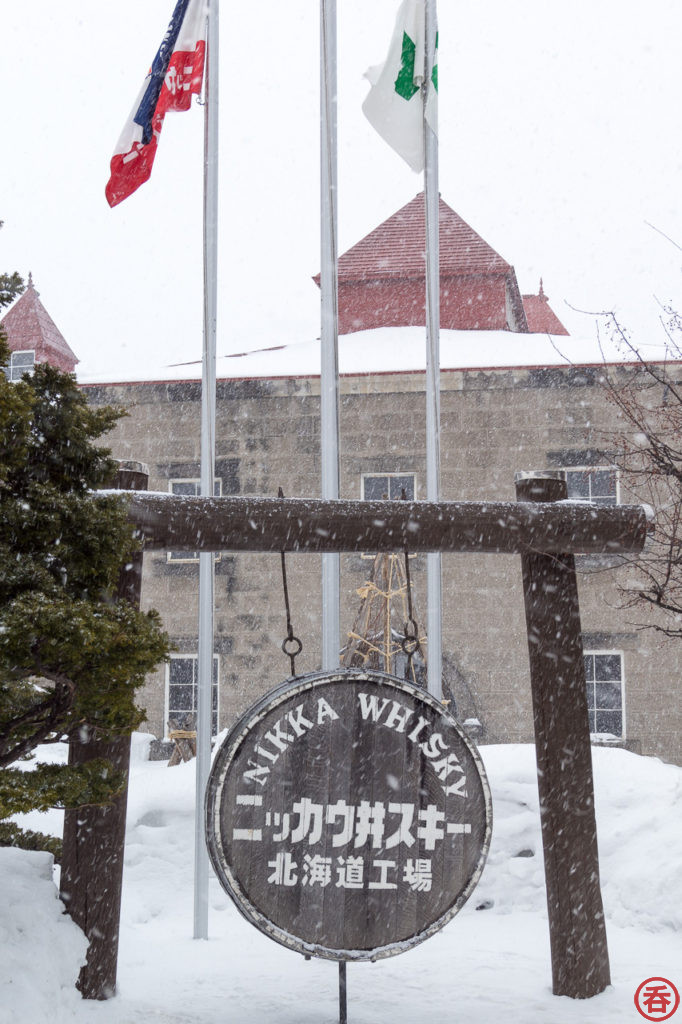 Of course one of the highlights of the trip is the visit to the paid tasting area. At the Yoichi distillery this is within the aforementioned museum, thus geographically before the free sample area. While sure you can get some good drams at an affordable price compared to a regular bar, that’s not really what I’m here for. Let’s get something unique! 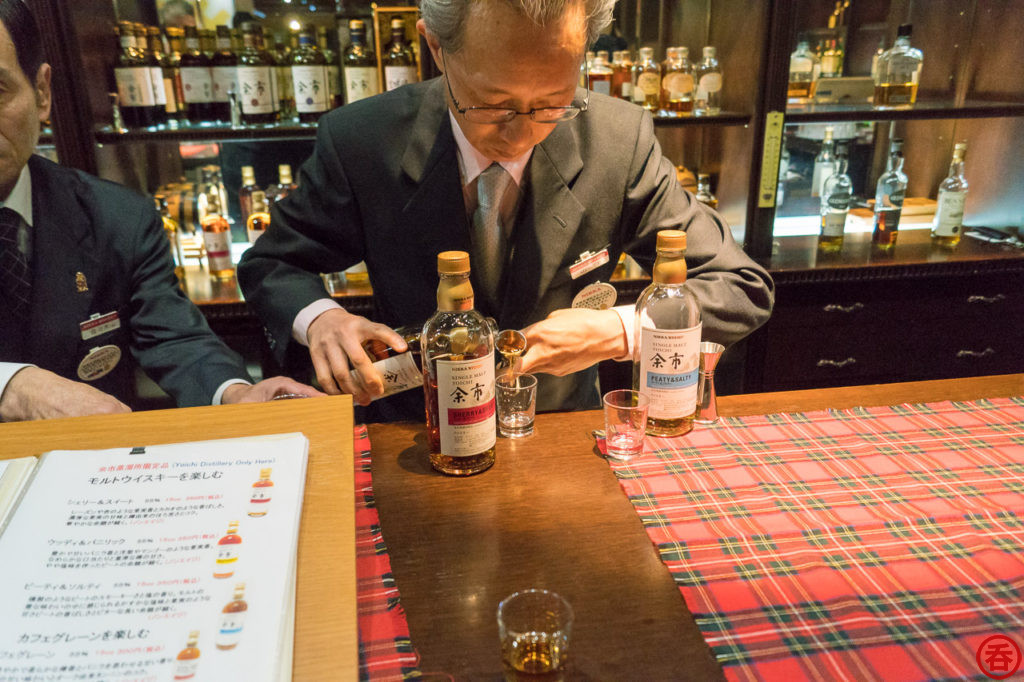 After four drams I’m starting to feel pretty buttery so I move to the free sample area. This concludes our tour in Yoichi! Since it’s only an hour from Sapporo, if you’re visiting the north of Japan, this is a very easy trip to make for some great whisky.