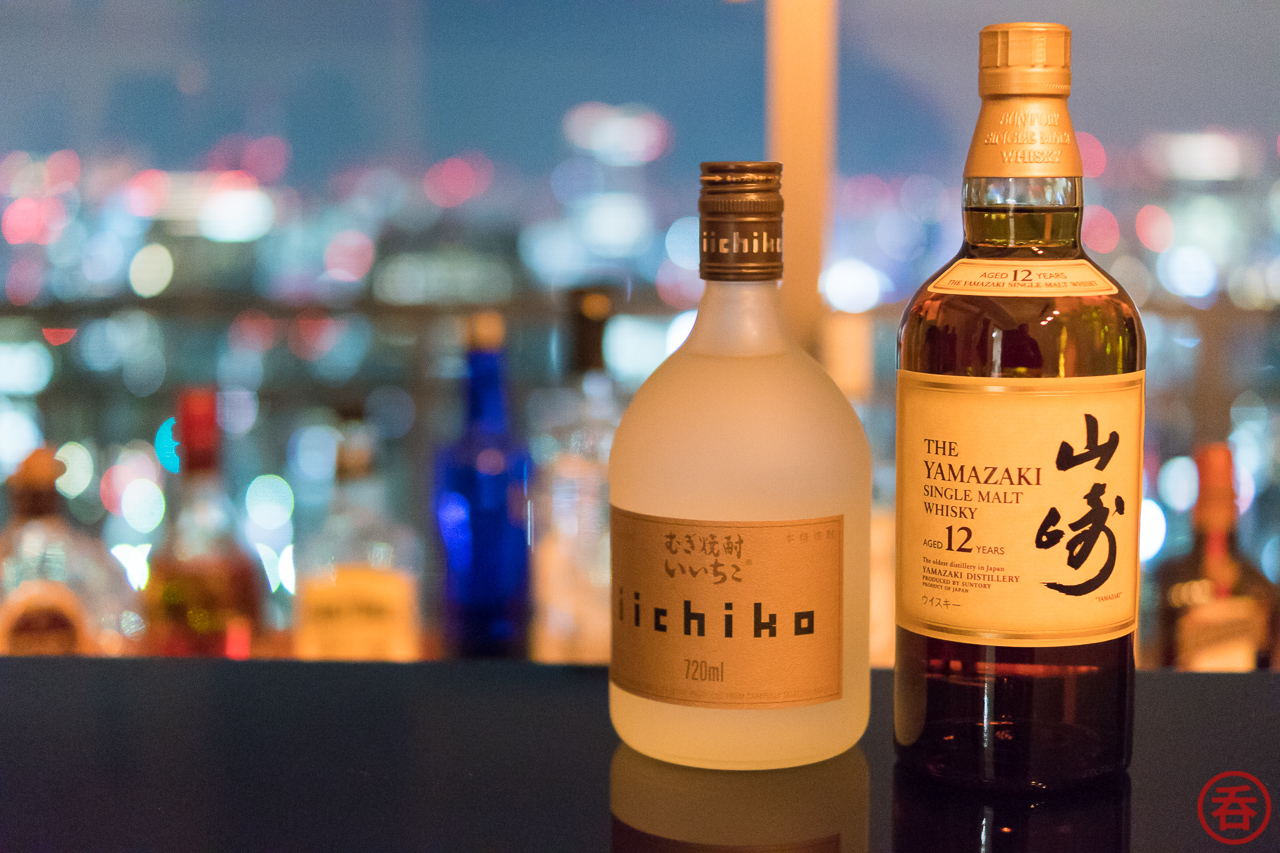 Shochu, pronounced shōchū, is Japan's national distilled beverage. As you learn more about the drink, you'll discover that one of the varieties of shochu is barley-based. Malted barley, of course, is also the main ingredient in your favorite malt whisky. Does this mean barley shochu is the Japanese version of whisky? Let's think it through. The kneejerk answer is: of course not, we already have Japanese whisky, and it's great!

On the other hand, if you get into the details, you'll find that barley shochu and whisky actually do have a lot in common. Let's put them side-by-side and see what's going on.

You probably already know, but let's reconfirm. Enjoyed worldwide, whisky is a distilled beverage that's fermented from the mash of usually malted grains. Grains is obviously a pretty broad term, but most whisky uses rye, corn, or malted barley.

Our concern for this article is the barley-based ones. In the US, you're allowed to call your whisky a "malt whisky" if it uses at least 51% malted barley. Single malt whisky generally refers to whisky that's distilled at a single distillery. Scotch whisky has an even stricter definition that includes requirements for specific ingredients, length of aging, the wood used for the barrels, and more.

Clearly, honkaku shochu is a better place to look for our comparison. But 49 ingredients?? What the heck does that mean? While barley is certainly one of them, many are far more exotic than most people are willing to even attempt: milk, sunflower seeds, onion, hyacinth, and even cactus, for example. Manufacturers generally stick to the old staples of rice, potato, or barley though. We'll keep with the barley.

With the above definitions in mind, next let's see behind the scenes, at how both barley shochu and malt whisky are made. 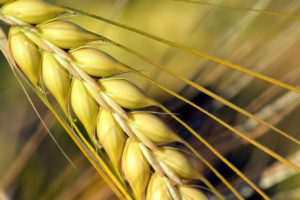 Step 1A: Malt the barley (whisky only)

While many whisky makers purchase pre-malted (i.e. partially germinated, then dried) barley, many also handle malting of the whisky themselves, often using a floor malting. Some even use peat as fuel for fires used to dry the malt. Either way, this process releases enzymes like α-amylases and proteases, enzymes which allow saccharization to occur -- that's the process of turning starches turn into glucose. Without this sugar, the yeast has nothing to eat, so you wouldn't get any alcohol in the following steps. That malted barley is then milled down and goes through further extraction of sugars in a mash tun.

Step 1B: Make koji (shochu only)

Malting is not used when making shochu! This is our first significant difference between the two beverages. Why not? Don't we need those enzymes?

Shochu makers take a different approach. Instead of malting the barley, after a good washing, the barley is steamed then sprinkled with koji spores (one of three varieties). That's left to sit for a good 40 hours or so. More mold grows and the result is called barley koji. That koji is what helps performs the saccharization of barley in shochu.

If you're familiar with making sake, that's probably not a new process to you. The difference of course is that, in sake, you put the koji spores on rice instead of barley. That's called rice koji.

Koji is technically a mold. Drinking mold may sound nasty... so let's instead just think of it as a "fermentation starter." Making koji is also one step of making soy sauce and miso.

Now that we have our barley fully saccharized (whether via malting or koji)--a wort if you prefer--we're ready to begin fermentation.

When making whisky, this is done just once, in a washback, over the course of a few days. You end up with a 5-7% abv "beer" called a wash.

But when making shochu it's a bit more complicated. It's our next big difference. For shochu we have two steps: a first fermentation and a second fermentation. The goal of the first fermentation is solely to let that koji continue its saccharization and letting the yeast grow; it's added at this step. And grow it does! After five 5 days, there's an estimated 200-300 million yeast cells per cubic ml at this stage.

The second fermentation, which takes 1-2 weeks, introduces the actual ingredients of the shochu in question. In our case, that's barley. This barley is processed beforehand to help the yeast do their job and convert that glucose into alcohol. The end result of barley shochu's two-step process is a much stronger "moromi" at 14-20% abv, since it's been fermenting for a significantly longer time.

The center of attention of any distilled beverage is of course the distillation itself. In the world of whisky you'll find both maker and connoisseur combing over every imaginable aspect of the distillation, ranging from making sure the still doesn't explode to the position and number of dents the still has after years of use.

As a historically more working-class beverage, it's rare to see people going into that level of detail for barley shochu. Conceptually though we're doing the exact same thing here for shochu.

In whisky, we start by distilling that 5-7% abv beer to get a "low wine" of 20-40% abv. The low wine is distilled once again in a separate still, yielding a new make whisky of 60-70% abv. Usually you use a pot still for both distillations, and they're often made of copper.

But with shochu? Keep in mind our moromi is already quite strong at 14-20% abv. Also remember Japanese law says we can't distill it so the end result is above 45% abv. If we did that, it would be classified as a "liquor," the tax basically doubles, and we even need a different license. The result is that honkaku shochu is distilled only once. While it starts at around 70% abv, as the still keeps running, the alcohol inside is reduced so you should end up with 40-45% abv by the end of the run. While pot stills are also used in shochu distillation, they're typically made of steel rather than copper.

Next, the paths of our two drinks diverge.

I don't need to remind you that aging is a very big deal for a lot of whisky drinkers. That's entirely justified -- science has proven that spirits change at a chemical level by spending time in a wooden cask. What happens when you age it for 15 years instead of 10? Or use a different wood? Or age it next to the ocean? How about in the ocean? Or char the barrel? Makers have done plenty of experimentation already, and they are constantly finding new ways to shake things up in terms of aging. The whisky drinking public is very willing to pay a significant premium for whisky that's spent a longer time in a barrel.

While shochu is "aged," this typically happens in stainless steel tanks and has no impact to the flavor profile. The aging is solely to allow some of the oxidizing oils to float to the top of the tank for easier removal, delivering a more consistent flavor. Some other kinds of shochu are aged in urns, which while it may have a slight impact on the flavor, aroma, or color, it's negligible when compared what a wooden cask does to a spirit.

With barley shochu, we start in a similar place as malt whisky. What happens if we end in the same place? Cask-aged barley shochu does exist, but it's still quite rare.

There's a brick wall here codified into Japanese law: shochu cannot be amber! "Amber" is defined by law as an absorbance of A>0.08 at 430nm and 480nm. No, I don't really know what that means either, but if you ever find a barley shochu as amber as decently aged whisky, let me know. This law supposedly exists to assure that shochu isn't confused with other aged spirits (whisky, brandy, rum etc.)

The longest cask aging you'll see on a barley shochu is usually a handful months -- if it's cask aged at all. While it might be possible to filter after aging and reduce the amber, that's not something we've seen shochu makers try. Instead, they're simply not aging shochu for very long. Or they pay the tax, and charge customers for a premium shochu.

Here's a handy table to summarize!