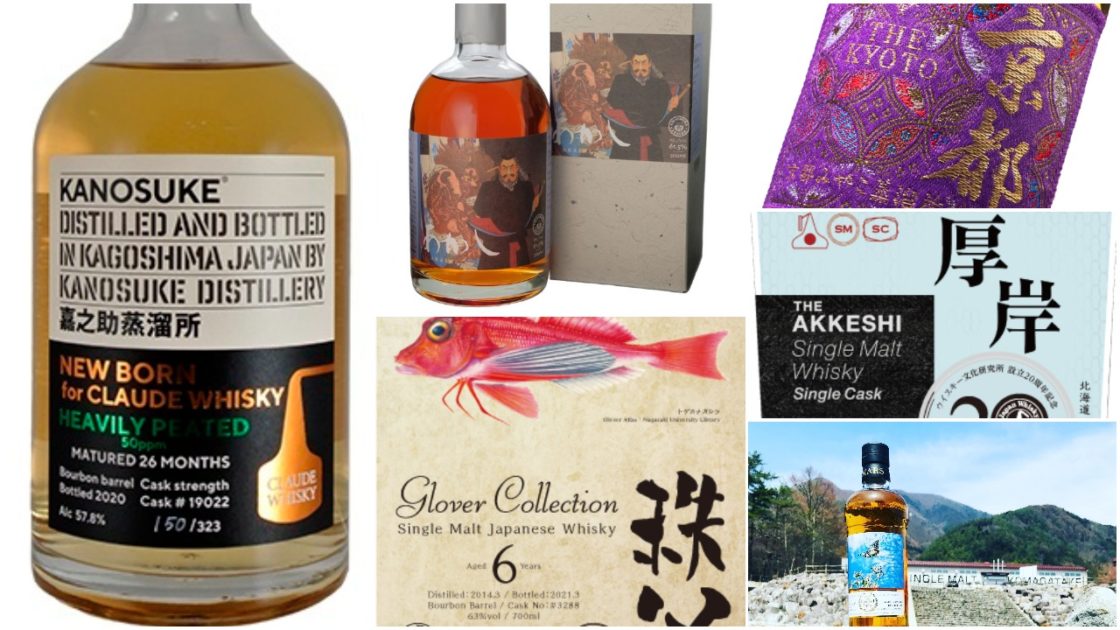 This month’s roundup of recent and upcoming releases brings in a host of interesting bottles from Akkeshi, Shinshu, Chichibu, Kyoto, and more.

Up first, and obviously near and dear to our hearts, are two single cask releases from the Japan Whisky Research Centre.

Tsuchiya-sensei revealed via his personal blog that two Japanese whisky bottles will help celebrate the 20th anniversary of the establishment of the Japan Whisky Research Centre.

Up first is a 6 year matured single cask from Chichibu, specifically a Bourbon barrel distilled in March 2014, then bottled in March 2021.

Single cask releases from Chichibu are always exciting and hard to find, but they’re not exactly infrequent. Potentially more interesting is the JWRC 20th Anniversary bottle out of the Akkeshi Distillery. To my knowledge this is Akkeshi’s first single cask release.

Details about pricing and availability are yet to be announced, but it definitely helps to be a member of the JWRC if you aren’t already.

Speaking of exclusives, Gifu’s Whisky Boutique Claude landed a “spinoff” of Kanosuke’s New Born Peated (which recently won a Gold medal at WWA 2021, by the way). Rather than the 24 months of the Peated, Claude Whisky’s release is 26 months, and it’s Heavily Peated, at a heavy-indeed 50ppm.

Speaking of Kanosuke, the first ever Kanosuke Single Malt is slated to land in early summer!

The next installment in the venerable Ghost Series by Stefan van Eycken comes by way of Akashi. Available exclusively through WhiskyMew for 12,000 yen, Ghost #15 is a 4:6 vatting of a 3-year ex-sweet potato shochu(!) Sherry cask whisky and a 3-year Bourbon barrel whisky. The two are then married in a Port cask for another year, bringing the total aging to 4 years.

On the nose we can expect nutmeg, prunes, and other dry fruit. With a hint of minty candy. Then on the palate there’s stemmed raisins and concentrated grape juice. Slightly peaty, with a bit of coffee bean. Sweet tropical fruit hides behind woodiness.

At 849 bottles, this is also probably the most plentiful Ghost Series release thus far.

Last year I posted about the newly opened Kyoto Miyako Distillery, Kyoto’s first whisky distillery. I also posted about how the distillery said they aren’t going to rely on the power of the Japan brand. And how I thought it may or may not be related to Matsui Shuzo.

They’ve now announced the release of their first three bottles, all in the Kyoto Whisky series.

How do you release whisky bottles so quickly after launching a whisky distillery? Easy: just don’t use whisky you distilled yourself. They’ve taken a page right out of Matsui’s playbook.

For starters, despite saying they aren’t going to rely on the “Japan” brand, their very first whisky is literally named Kyoto Whisky. No, I’m not making this shit up. If naming your whisky after Kyoto isn’t relying on the Japan brand, I don’t know what is. They even use labeling like Nishijin-ori.

Also, my early suspicions about their connection to Matsui Shuzo have been all but confirmed. At first glance, it appears they use the same glass vendor. And I heard through the grapevine that all of the distillery’s staff trained at Kurayoshi. Buyer beware!

Weighing in at 47% abv, this edition of Single Malt Komagatake is a vatting of Bourbon barrels and American white oak casks. Comes in at 8800 yen after tax but it’s available only in Shinshu. Word on the street is plenty of bars in Tokyo have gotten their hands on bottles though!