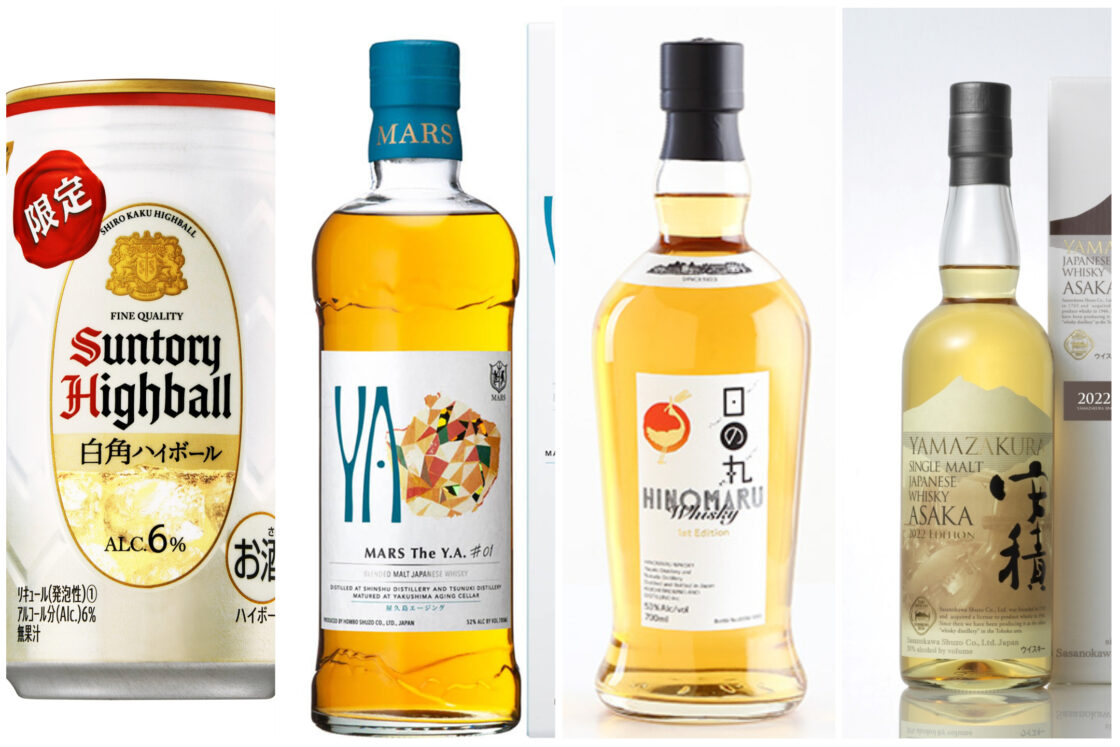 This month we take a look at four new products that have already or will drop relatively soon. Releases from Suntory, Kiuchi Shuzo, Mars Whisky, and Asaka.

Since 2019, Suntory Kakubin White–a softer version of Japan’s bestselling whisky, Kakubin–has been largely absent from store shelves. The only exception to that was Suntory’s “Shirokaku Mizuwari,” a canned mizuwari weighing in at 9% abv at 250ml.

Though there’s still no telling when–or if!–we’ll see bottles of Kakubin White again, Kakubin White will soon also be available for a limited time via a canned highball. The company says that overall the Kakubin Can highballs are doing quite well, putting up a whopping 10% YoY sales increase from January to May of this year. The 6% abv Kakubin White Highball Can drops August 9, 2022.

Here’s a new Blended Malt series out of Hombo Shuzo’s Mars Whisky brand, specifically taking advantage of their Yakushima Aging Cellar. The first releases consists of 12,000 bottles blending malt whisky distilled at both Mars Shinshu and the nearby Tsunuki Distillery, then aged in Bourbon barrels at Yakushima.

Anyone who visited Kiuchi Shuzo at the Whisky Festival in Tokyo 2022 probably knows about this release already. It’s the first public release bottle of whisky from them, dubbed Hinomaru Whisky The 1st Edition. We’ve had their whiskies before both at the brewpubs and in cans, but as far as actual bottles go, this is a first for the company. Looks like it’s a blend of a pretty wide range of whiskies distilled at both the Nukada Distillery and the Yasato Distillery, using malt, wheat, and rice. So both malt and grain.

Notably, this isn’t a Blended Japanese Whisky because while some of the component whiskies go as far back as 2016, others haven’t yet been aged for 3 years. Officially, it’s a NAS (Non Age Statement).

I’m happy to say there also shouldn’t be much sticker shock with this one: it’s 5000 yen after tax for 700ml of 48% abv! Sure, it’s under 3 years, but I think we can manage. It comes around July 20, 2022, and will be released via the company’s brewpubs and some liquor stores in their native Ibaraki prefecture.

Great to see some more semi-normal releases coming out of Sasanokawa Shuzo’s Asaka Distillery, which recently picked up a “World’s Best Blended Malt” title at WWA2022.

Yamazakura Single Malt Asaka 2022 Edition is mostly non-peated malt aged in Bourbon barrels, but it also contains a dash of peated stuff. Asaka Distillery’s characteristic topnote of citrus and lemongrass is found on the nose, with a nutty, vanilla, and malty palate. Non-chill filtered, natural color, 50% abv at 700ml for 11,400 yen after tax and shipping etc.