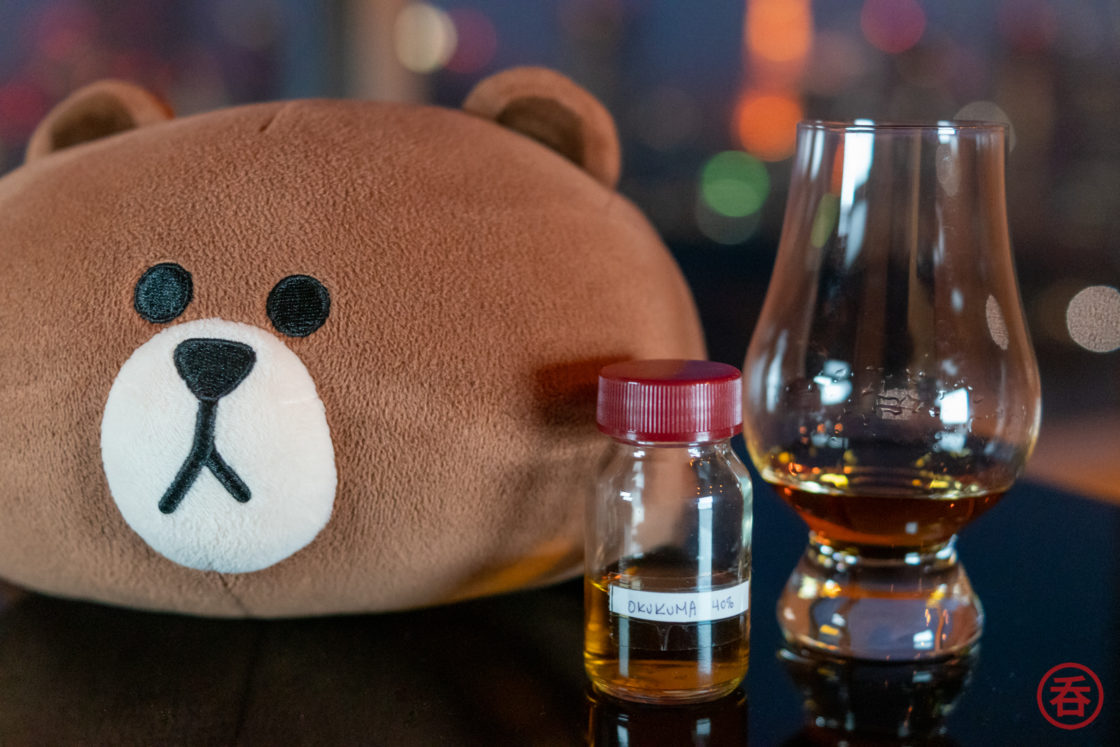 Today we're trying another hybrid spirit that blurs the line between shochu and whisky. Okukuma comes from the Toyonaga Distillery, Thanks (again) to Mel of nomunication.jp's facebook community for providing the sample.

As we've discussed in the past, here in Japan, aging this country's native spirit (shochu) in wood for too long legally throws the spirit into a bizarre limbo between shochu and whisky. Japan's National Tax Agency needs to draw the line between the two categories somewhere, and they've chosen to draw that line based on the color. To legally be called shochu, the spirit needs to have an absorbance value of 0.08 or lower. In other words, it needs to be very light. On the other hand, to be called whisky in Japan, you need to use malted grain.

Everyone once in a while there's a shochu or awamori maker in Japan that thinks to themselves, hell with the legal category, how about we just stick the spirit in a cask for a long time? Okukuma is the fourth such bottle we're trying that's the product of this line of thinking.

Okukuma starts its life as a rice-based shochu, as the Kuma region is famous for, then spends at least 7 years in sherry casks. It weighs in at 40% abv, so certainly leaning towards a more whisky-like strength. Toyonaga doesn't call it whisky, as loose as the category definition may be here in Japan, but taste-wise it's likely close to whisky.

Oh, by the way, Kuma (球磨) here refers to a region of Japan famous for shochu. It's one of the few regions of Japan that has acquired GI status for its shochu. But kuma (熊) also means bear, so Brown made a cameo in the pic. Let's give it a try.

Nose: Plenty of dark fruits and grapes of course. Nice and thick, and there's a tiny bit of spiciness but it's nearly--not completely!--unrecognizable as a shochu anymore.

Palate: Woody, where a big helping of umami is the backdrop to a sweet basket of dried oranges, prunes, and a few slices of lemon and lime.

Finish: Rice is the main influence here, but things drop off rather quickly. Leaves us with some grain and dry wood.

Strip any kind of maltiness that you get in a standard sherry whisky, throw in umami, and you're getting close to the profile of Okukuma. Unlike a few bottles we've tried in the past, this one would probably get picked out if you slipped it into a lineup of whiskies. Overall though it demonstrates the promise of shochu if you were able to age it longer.