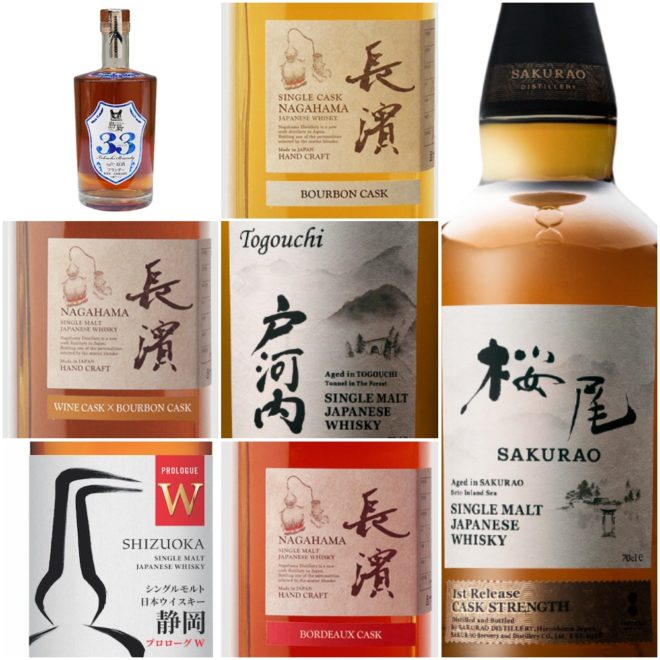 This month’s round-up brings on a healthy helping of new bottles from Shizuoka, Nagahama, and two single malt whiskies from Hiroshima’s Sakurao Distillery. There’s also a lottery for Kanosuke’s single malt and a new brandy out of Hokkaido.

Following quickly after their very warmly-welcomed first single malt whisky, Prologue K, the Shizuoka Distillery is at it again with a new release called Prologue W.

This one starts shipping on June 21, 2021. The online lottery is open from June 11 to June 13. It should be interesting to compare it directly with Prologue K, given they are both 3 year maturation.

Here’s one of the releases we expected this year: the first single malt out of Hiroshima’s Sakurao Distillery.

But it’s not just one bottle. Instead, Sakurao is giving us two bottles, differing in their maturation location. These will both be released on July 1, 2021.

By my count the Nagahama Distillery is now up to volume 3 of their releases (see: volume 1 and volume 2), and it looks like they are continuing to just crank out single cask/”single batch” bottlings. I suppose it can’t be helped given the distillery’s tiny output. These all drop on June 1, 2021.

We talked about the upcoming and very highly-anticipated Single Malt Kanosuke last month. The company is now running an online lottery to purchase bottles, and it runs until May 27 at 5PM JST. If you’re interested in this bottle and have a shipping address in Japan, definitely enter this lottery because I suspect demand for it will be extremely high once it’s released on June 16. Read my review of their most recently released bottle to get an idea of what to expect.

In other spirits news, Kokobu Hokkaido is celebrating their 80th anniversary this year. To commemorate the event, they’re release a 33-year aged version of Shima Fukuro brandy. This was distilled way back in 1987.

I like Tokachi Brandy a helluva lot — read my review of one of their 30-year brandies to find out why. This 80th anniversary bottling will be limited to a mere 400 bottles, and only made available to the on-trade. If you see it in a bar and have even a passing interest in Japanese brandy, you know what to do.