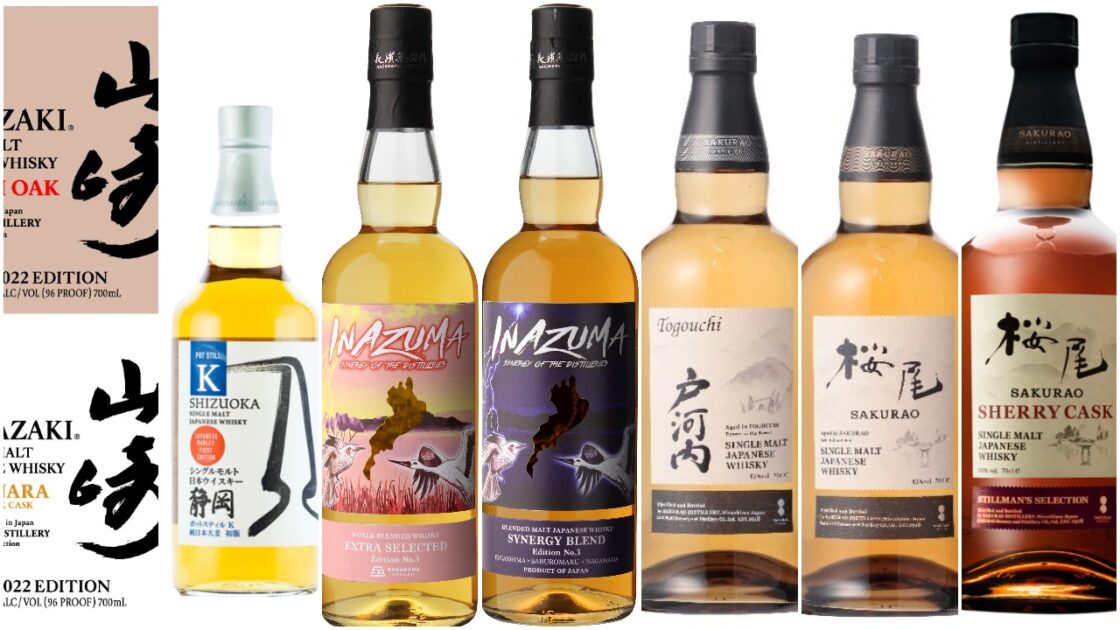 Today’s recent release roundup includes a new collab between Eigashima, Nagahama, and Saburomaru, plus releases from Shizuoka, Sakurao, and the official announcement of the 2022 Yamazakis.

Shiga’s Nagahama Distillery, Toyama’s Saburomaru Distillery, and Hyogo’s Eigashima Distillery. They swapped stocks to create this blend. The Eigashima component is lightly peated malt aged in Bourbon casks, the Saburomaru one is “specially” peated, and Nagahama brings it together with Bourbon and Sherry aged malts. The tasting notes give a hint of the complexity that kind of lineup should bring: malty, custard, orange spice, and vintage leather are topped with a leafy accent that’s also smoky. Berry jam and salty caramel finish things off.

Look for one of 600 bottles of this one from May 31, 2022. 700ml, 47% abv, and 15,000 yen plus tax. If you aren’t particular about bottles meeting the JSLMA definition of Japanese whisky, also keep an eye out for the “Extra Selected Edition” that adds foreign malt and grain that Nagahama has on hand.

The first of three bottles announced by Hiroshima’s Sakurao Distillery is a limited edition–aren’t most these days?–that’s a blend of the best sherry cask stuff they have on hand right now. Raisin, cacao, dark cherry make up the profile, so sherry cask lovers should take note.

…is the 2022 edition of last year’s inaugural release from the distillery. This one is aged at the company’s warehouse on the distillery grounds.

Perhaps one of the most intriguing aspects of this one is the price: 6,600 yen after tax for 700ml 43% abv. Almost every release I write about these days is 10,000 yen or more, so it’s great to see budding Japanese whisky distilleries offering a more accessible price point.

Maybe they took a hint from the success of their own Sakurao Gin Original, which I called one of the highest cost-performance bottles you’ll find in Japanese craft gin. And it’s become the go-to for a lot of bartenders in Japan.

Of course, we can’t forget about the Togouchi tunnel-aged release. This one has the same price and abv as the Sakurao, essentially getting you two actual Japanese whisky bottles for what you’d pay for a single bottle from other distilleries. I hope this becomes a trend!

Out of the Shizuoka Distillery is “Pot Still K,” essentially a new edition of last year’s Prologue K. Like Prologue K, it’s distilled using just the ex-Karuizawa still, but it adds a twist: it uses only Japanese malt. That’s not a requirement for being a JSLMA-standard Japanese whisky, but Shizuoka is sticking to their mission of giving us a taste of Japan. Worth noting that the company says this bottle does not use Shizuoka-born malt, so we’ll need to wait a bit longer for that edition.

Back in January we learned of 2022 editions of Single Malt Yamazaki, and it looks like those have now officially been announced. Somewhat oddly, the announcement didn’t come out of Japan though, implying that these are headed overseas. I imagine with Japan opening up to tourists again, and Yamazaki+Hakushu being open again, we’ll see some of these make their way back.