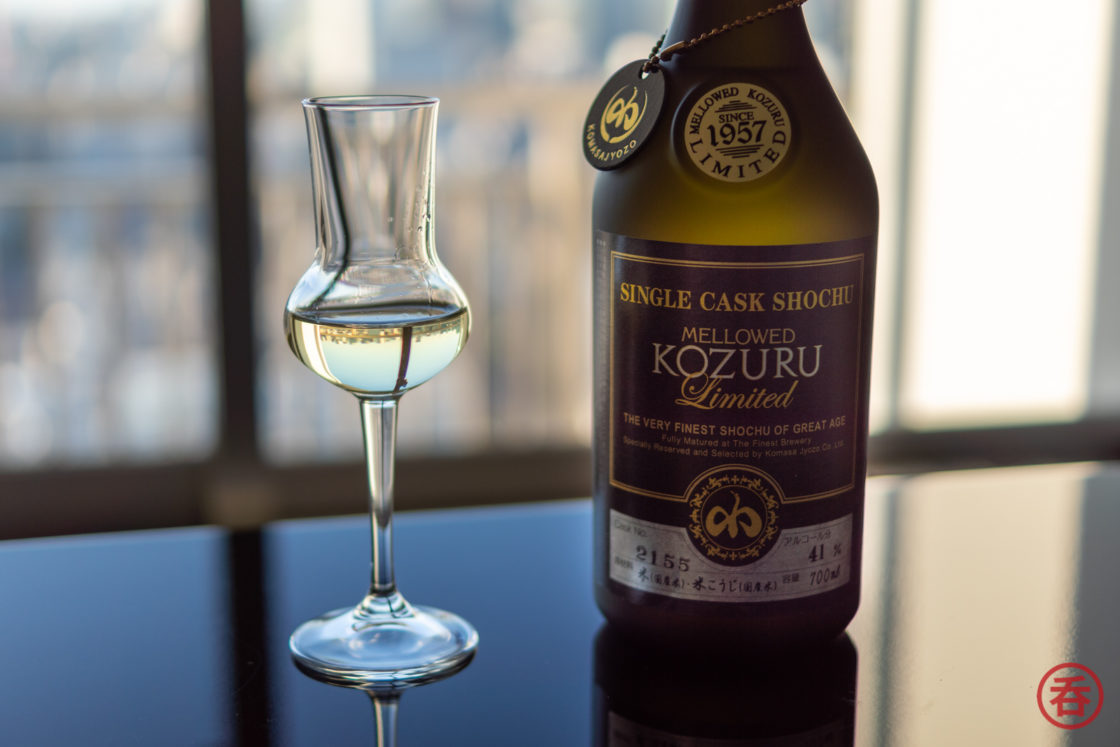 Mellowed Kozuru is a brand of cask-aged shochu from Komasa Jyozo in Kagoshima prefecture. Tonight we're drinking a bottle from the top of that shelf: Mellowed Kozuru Limited. In a rarity for shochu, it's a single cask aged rice shochu.

Komasa Jyozo made a name for themselves in the shochu world with the industry's first cask-aged shochu, dubbed Mellowed Kozuru, in 1959. Second-generation president Kanosuke Komasa wanted shochu to stand shoulder-to-shoulder with spirits from around the world. Since then, Komasa Jyozo has been pioneering different kinds of cask maturation for the spirit.

That said, as we've discussed before, using the term aged around shochu doesn't quite mean the same thing as it does with other spirits. Mellowed Kozuru is aged in an oak cask, sure, but Japan's shochu regulations prevent it from being aged longer than just a handful of years. Three years, in Mellowed Kozuru's case. Age it for too long and you can't call it shochu.

The company's Mellow Kozuru Excellence is now their flagship cask-aged shochu. Excellence weighs in at 41% abv, and being a rice honkaku shochu, it's made solely with rice, koji, and water. After being distilled three times--a rarity for honkaku shochu, which is normally distilled only once--it spends 3 years in an oak cask. Excellence is also available at a slightly lower 35% abv, dubbed Mellowed Kozuru 35.

Then at a lower rung on the ladder is Mellowed Kozuru Migaki, at 25% abv. This one is a blend of cask-aged barley and rice shochus.

That's the standard lineup. From there we get into more limited bottles like Mellow Kozuru Migaki Premium, Mellowed Kozuru Super Premium, and probably many more.

Today we're drinking one of these harder to find bottles: Mellowed Kozuru Limited. It's the basically the "single cask edition" Mellowed Kozuru Excellence, meaning it's still 41% abv, and still a rice honkaku shochu. Given it's a single cask bottling, though, it has that kind of exclusivity that Tsuchiya-san recently said will benefit shochu when compared to other spirits.

So will Kansouke Komasa's pioneering work in the 1950s end up propelling shochu to the world stage? Let's try it and find out.

Palate: Just in case you had any doubts, this is definitely a shochu at heart. The wood/cask element is not as pronounced as it was on the nose, but it's still noticeable. From the start we get plenty of white pepper and other spices, then a dry bitterness alongside salty sea spray. Smooth, round on the edges, and goes down very easily, especially on ice.

Finish: That bitterness continues, bringing sea salt too. We close things out with dark chocolate and malted milk.

Mellowed Kozuru Limited isn't a wild departure from a "rice shochu-like" flavor profile. Instead of stealing center stage, the cask aging enhances it. For a whisky drinker, this is probably a great place to start your journey into shochu.

At a higher level, it's bottles like this that make us question what honkaku shochu really is. And what it should be. Is it an affordable low(er) abv single-distilled spirit that harnesses the aromas of koji and the underlying ingredients, or is it something smoother that ought to be commanding a premium by spending time in a cask?

On the other hand... why not both? Blanco tequila, añejo tequila, white rum, and dark rum all have their times and places. Would it be so wrong to have both non-aged shochus and aged shochus out there?