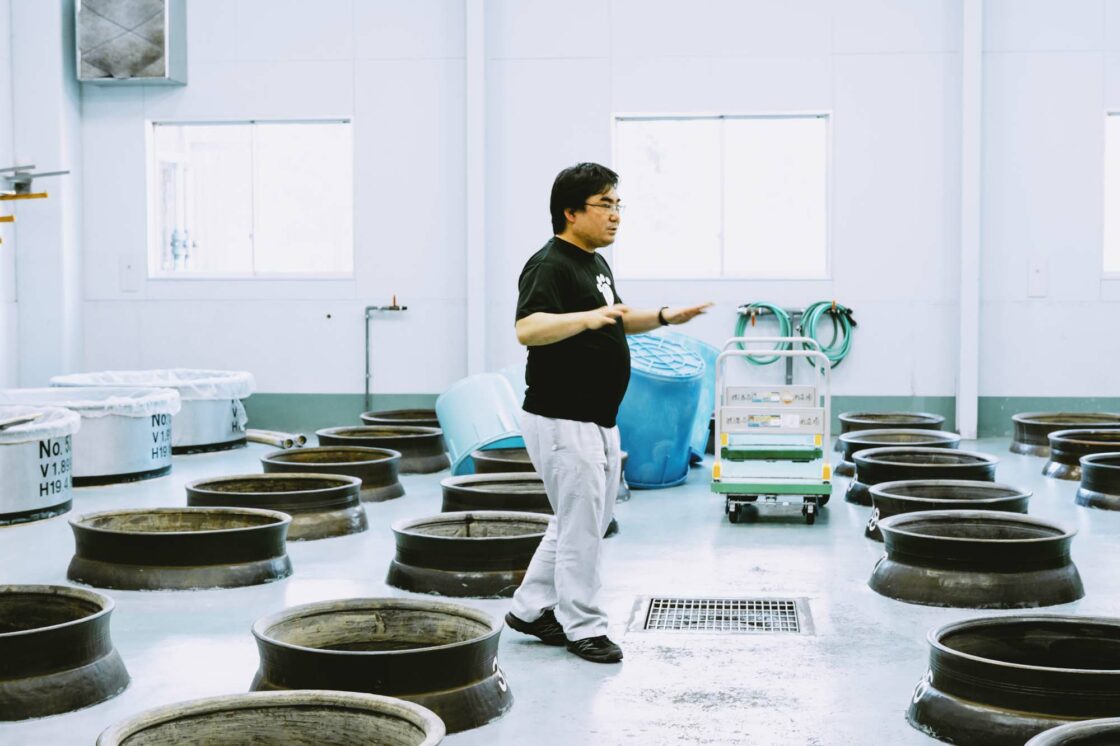 Rihei Ginger’s fresh take on shochu starts with the bottle, which has stylish frosted glass patterning that comes to sparkling life when light passes through. The name is printed in black directly on the glass near the bottom, rather than on a traditional paper label.

The drink inside, though, is what’s important, and Rihei is already starting to put down roots in the US market. “A bartender in Chicago has taken a liking to it and started using it in cocktails. We make regular shipments to her there,” says Ryohei Ochiai, who runs Ochiai Shuzojyo, the distillery producing this drink. Ochiai began exporting this shochu, with its fresh ginger aroma, to the United States in 2018 with assistance from JETRO. How has export success helped this Miyazaki Prefecture distillery evolve? Here, Ryohei shares his thoughts on this new venture.

Text: Sawako Akune | SHOCHU NEXT
Photos: GINGRICH (SHOCHU NEXT)
Translation: Jim Rion
This article was originally posted in Japanese on shochu-next.com. It is translated and posted alongside the photos on nomunication.jp with express consent.

The ripples of culture shock

Ochiai Shuzojyo stands in the southwest region of Miyazaki City, next to Miyazaki Airport. Founded in 1909, the company never even considered export until 2016. That year, seven distilleries in the prefecture teamed up and took advantage of a prefectural support fund to host a joint tasting event in New York. Ryohei, the fourth-generation head of his family company, explains that the event gave the distillers intense culture shock.

“First of all, we learned that licensing laws—particularly in New York—make it much easier for Japanese restaurants to get sake licenses. They have to apply for a different one to serve shochu, and the result is that the restaurants with hard liquor licenses tend to be relatively high end. The demand for shochu isn’t enough to justify more casual restaurants going to the trouble of getting a hard liquor license. Personally, I was shocked at how blindly optimistic we’d been.”

After that, Ryohei attended a seminar given by Keiichi Nishimoto, former head of JETRO’s Los Angeles office. His idea that shochu’s overseas growth should target higher end bars resonated with the distiller, so Ryohei decided to put his efforts into exporting shochu as a way of opening new sales channels. With aid from an expert with JETRO’s Consortium for a New Export Nation program, he began work on developing and selling Rihei Ginger.

“My initial idea was that if we were going to look overseas, then we should go with traditional shochu. But that experience at the New York tasting made me decide to go with ginger. We took three shochu to New York: our Akae sweet potato, Kaze no Fukuro barley, and Kagamizu Ginger. People who tasted the sweet potato shochu said things like, ‘I don’t really get it,’ but with Kagamizu Ginger, people said ‘Whoa! That’s ginger!’ It’s an ingredient people know and love all over the world. Drinkers recognize the aroma right off, so there’s no need to explain anything. That was a clear advantage. I also got some very good advice from a sake brewer who was already exporting, who said that rather than starting out with a really traditional Japanese spirit, we ought to work to raise awareness of what shochu actually is. There would be time to introduce the more familiar sweet potato once we reached that level. I quickly saw that he was right.”

He adopted the label name, Rihei, from the company’s founder. Ryohei explains that this represents a kind of re-founding, as the company looks to start their international efforts from a blank slate.

The first effort was a new ginger shochu based on the same methods used in Kagamizu Ginger. From the decision process onward, Ochiai Shuzojyo worked hand in hand with Kenji Kuwahara, a JETRO partner assigned to their case. Kuwahara also spoke with Shochu Next.

“Ochiai was my first shochu producer assignment from JETRO. I remember that Ryohei was intent on selling shochu as Japanese, rather than slotting it in as ‘soju,’ (a practice made common because of US tax laws),” says Kuwahara. Kuwahara was a partner with JETRO’s Consortium for a New Export Nation then, but now he works with the Ministry of Agriculture, Forestry and Fisheries food division as a JETRO export promotions expert. He recalls talking with Ryohei through all the various steps on the way. “Shochu still has far too little name recognition overseas. So, I remember telling him over and over that it wasn’t going to sell well right from the start.”

They set the ABV at 38%, which is relatively high for shochu, to target the bar trade, and after a lengthy development process, Rihei Ginger finally had its American debut. Ochiai started with around 1,000 bottles for the first six months. Kuwahara says, “Expanding overseas means starting out with minimum lot sizes of twenty or thirty cases. You go little by little. Selling a few million bottles a year amounts to an enormous success. Even if everything goes well, it’s like that first year is preparation, and the second year is when you really start making deals. Export really requires firm resolve from alcohol producers.”

“I remember Kuwahara telling me over and over that the company president has to actually speak during negotiations. I was nervous because I can’t really speak English, but he insisted that there’s no chance at business without the president showing his face. Now, I’m used to explaining things in my inexpert English. I write emails every month using AI translation software, too. I never would have believed I could do it before I started exporting! I’ve done pretty well, if I do say so myself!”

Ryohei has been conscientious in following up with retailers and joining in at international expos ever since the product launch. Now, he is getting inquiries from international markets far beyond the initial target of the United States. In the spring, he closed a major deal in Australia.

Ginger shochu opening the door to the world

There are very few ginger-based shochu on domestic shelves. “That could be because it’s kind of a pain to make,” says Ryohei with a grimace. “The smell of ginger sticks to everything when you distill it, so you have clean very carefully, and ginger doesn’t boost alcohol content, only cost. It’s a tricky ingredient for distillers.”

He goes on to give some insight into the process. “About twenty percent of our fermentation by weight is ginger. The fermentation mash is grain based, to which we add chopped ginger before vacuum distillation. The spiciness that ginger brings when used in liquor can be quite a tricky thing, but we figured out a process to get rid of the spice. We age the shochu for a year after distillation.”

Ryohei and his team at Ochiai Shuzojyo faced head-on an ingredient that be quite troublesome for traditional shochu production. Ryohei insists, though, that his company’s ability to approach whatever comes with flexibility has been part of the company’s path for generations.

“My old man insisted that, whenever something needed extra cleaning, then you cleaned extra (laughs). And ‘if it looks interesting, give it a shot’ has been something the family, and the company, has always believed. Right now, we’re in a time of transition and lots of producers are starting to try new things like we are. Personally, I think this new way of doing things suits me.”

Ryohei also has lots of ideas for the future.

“I still haven’t given up on getting the world to accept sweet potato shochu. France has cognac, Mexico has mezcal and tequila, Ireland has whiskey, and America’s got bourbon. I am holding out for the day when people come to think of Japan and its shochu, especially sweet potato shochu, the same way.” He knows that the path remains long, but remains optimistic. There are still doors we need to open to get there.

We’re going to use all the diversity and fun offered by shochu to teach international spirits fans about sweet potato shochu. We will bring shochu to drinkers of the world! That’s the passion that pushes me into the future.

SHOCHU NEXT is media to maximize your enjoyment of craft shochu and other Japanese craft spirits.

We tell the world about Japan’s gift to spirits: shochu.