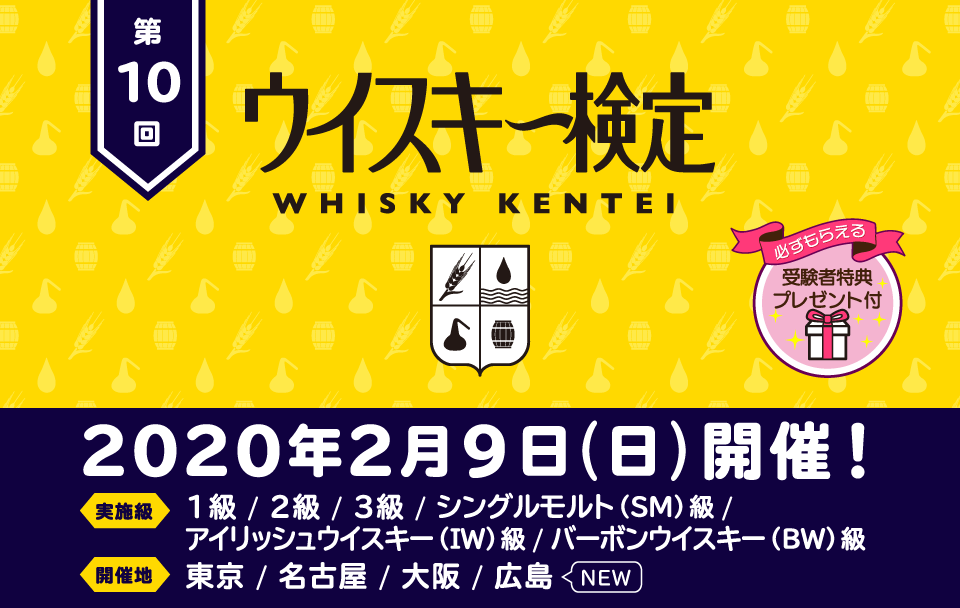 Take the Whisky Kentei in English on February 9, 2020

"Kentei" is Japanese for certification. And Japan loves certification programs! You can go through years-long government-issued professional programs, aim for lighter options like becoming an official tour guide, or do more fun and random ones like the Neko Kentei. Whisky is no exception, thanks to the Whisky Kentei!

By far the biggest whisky certification program in Japan. Whisky Kentei is put on by the Japan Whisky Research Centre (JWRC). You may know JWRC already since they are behind several Whisky Festivals, Tokyo Whisky & Spirits Competition, and recently pushing for a stricter definition of "Japanese whisky."

Now in its 10th offering, over 14000 people have sat for Whisky Kentei exams since it was first held in December 2014. The Japanese edition of the exam offers Levels 3 (easiest) to 1 (hardest) as well as versions specific to Irish Whiskey, Bourbon, and Single Malts.

From next year, you'll be able to sit for the Whisky Kentei Level 3 or Level 2 exams in English on February 9, 2020 in Tokyo. The easier Level 3 exam is 100 questions, multiple choice, requiring 60% or above correct to pass. Level 2 is also 100 multiple-choice questions, but it requires 70% or above.

What's on the test?

An English exam is  significant because Whisky Kentei up until now had two hurdles for non-native Japanese speakers: detailed knowledge about whisky, but also the ability learn those details about whisky in Japanese, and take the exam entirely in Japanese.

The exam covers on fundamentals such as what separates whiskey from whisky, the basics of how whisky is made, geography, and the difference between a single malt whisky vs. just any whisky. But there are also some more detailed questions like the history of individual distilleries inside and outside of Scotland, It's both high-level and specific.

Why even bother with a whisky certification?

I know that a lot of people outside of Japan may roll their eyes at the idea of a "whisky certification," but having passed Whisky Kentei Level 3 myself several years back, I can say that it really drove me to study and learn much more about whisky.

As a result, my enjoyment of whisky, be it Scotch, Japanese, Bourbon, or anything else, has gone up. If you approach Whisky Kentei as a way to get motivated to actually sit down and study whisky--and not simply drink it--you'll get a lot out of the test.

A few notes though

Signing up for the Whisky Kentei