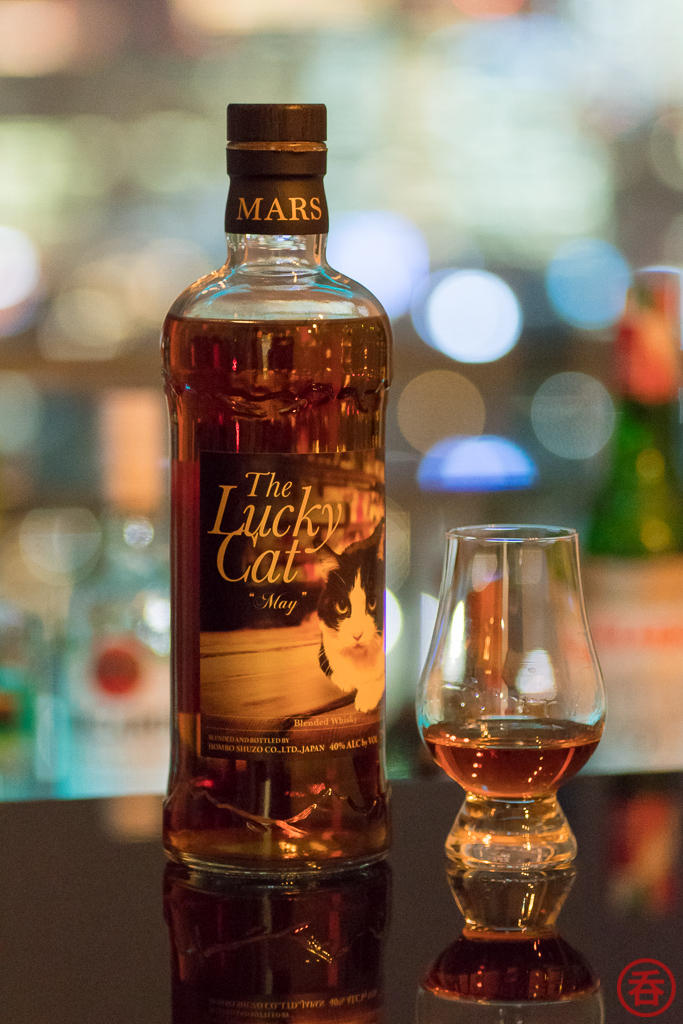 Someone called this latest release in Mars Whisky's Lucky Cat series, "May", a stealth release. I couldn't agree more. As of this writing, it's still not on Hombo Shuzo's homepage, despite going on sale already. And the whole "going on sale" part was the only way anyone seems to have found out about this.

When I originally posted the release announcement, going into it, I was under the impression that all of The Lucky Cat series were distilled in Japan. This is the fourth in the series. Then, after someone went all Cunningham's Law on me, it seems bizarre I missed it earlier. Hombo Shuzo isn't hiding the fact that it's not distilled in Japan, instead saying it's "blended and bottled" by them. The word "distilled" appears nowhere on the bottle.

In any case, a friend gifted me with a bottle, under the condition that I actually drink it and review it here.

Of course, using imported whisky doesn't necessarily make a whisky bad. I liked that KURA the WHISKY Rum Cask Finish, after all. I'll try and keep an open mind. The Lucky Cat "May" here features an umeshu cask finish. That's because Hombo Shuzo is making umeshu down at their Tsunuki Distillery -- there's even a single cask version of it. That said, this NAS non-Japanese blended whisky retails for around 4,500 yen before shipping. Looking around for bottles still in stock, it's jumped up to over twice that already. Now you could just go buy a bottle of NAS blended Scotch for far cheaper, but it sure as hell wouldn't have an umeshu cask finish. Looking past the Mars brand and Japanese whisky mystique... is that ultimately what we're paying for here?

Anyway, let's just get to the drinking.

Nose: We start off with Bergamot orange peel, tobacco leaves, and a bit of leather. It soon moves into brown sugar-coated prunes.

Palate: Those prunes come front and center right off the bat. Later we get a hint of green apple and blackcurrant, while moving very gradually into vanilla custard. If you're into sweeter Scotch, you'll be right at home.

Finish: Some smokiness and oak come through towards the end here. The grain also sticks its head out quite a bit, with lingering corn and oats. 10 minutes later, that tobacco leaf is still around.

It may not have a ton of depth but I enjoyed "May." Though not a proper Japanese whisky, the umeshu finish does bring a certain sweet tartness that's hard to find elsewhere.