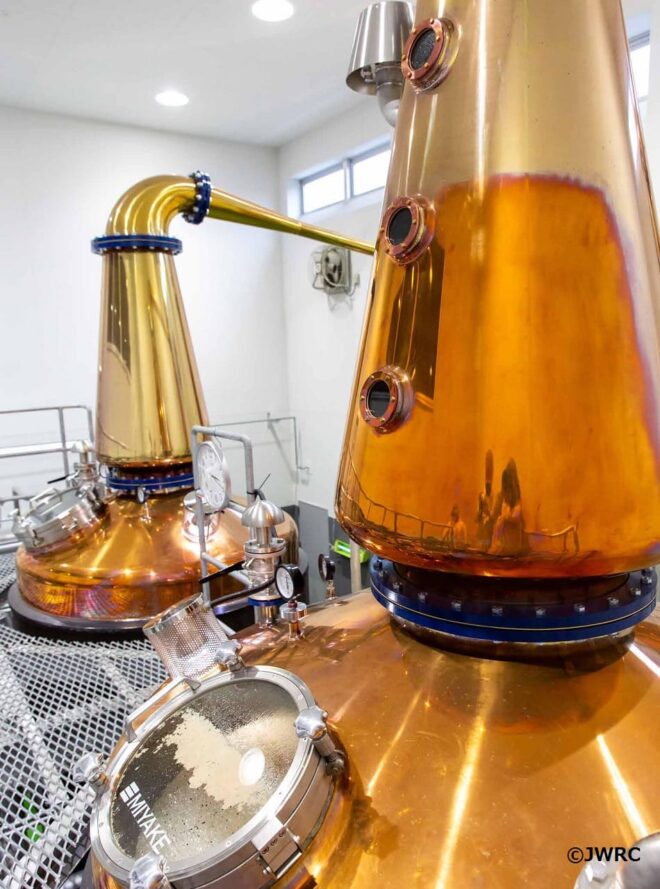 Hanyu, Saitama, has been prosperous in indigo dyeing since the Edo Period. It’s here that a distillery well-known to many whisky fans, Hanyu Distillery, produced malt whisky until 2000. Some 20 years later, the Hanyu Distillery has finally returned. We report from the new Hanyu Distillery, where production is already underway.

Header image: The lantern-shaped pot stills are slightly larger than they were in the past. The wash still is filled up to 6000L, and the spirit still up to 3000L. The joints feature indigo-colored rings, as the area is famous for.

The distillery is about a 5-minute walk from Hanyu Station on the Chichibu Railway or Tobu Isezaki Line. Toa Shuzo is the maker of Haregiku sake and shochu. It’s here on their property that the Hanyu Distillery has been reborn.

Toa Shuzo traces its history back to the early part of the Edo Period, where in 1625 they began making sake in Chichibu. The headquarters was moved to its current location in 1941. They acquired a whisky-making license quickly after the war, in 1946, and production of genuine malt whisky began in the early 1980s with two pot stills. This was the heyday of Japan’s local whisky; the company’s “Golden Horse” whisky became so popular that it earned the nickname “Hero from the East.” But that success was short-lived. Japanese whisky’s bubble burst in the late 1980s, and the category saw a prolonged downturn. Whisky production stopped entirely in 2000. Later, a change in ownership resulted in the dismantling of the distillery itself.

The man behind Hanyu Distillery’s recovery story, Toa Shuzo’s president Yasuhisa Nakata, explains: “For some time after that, we continued using whatever was leftover, but eventually we were forced to discontinue products that used that whisky.”

In 2016, the company resumed importing whisky from overseas, and the “Golden Horse” brand returned.

“We knew even then that we wanted to bring the Hanyu Distillery back and resume making whisky. But that would require significant investment. That’s when we took the discussion to Japan Import System, who had been helping us out with importing whisky.”

Because whisky requires at least three years of maturation, one of the major hurdles facing whisky makers is cash flow during this period. That’s in addition to the construction costs of the distillery itself. Japan Import System president Katsuhiko Tanaka acted as an intermediary, resulting in UniCask.

The latest infrastructure from Miyake Industries

“UniCask enables management of the distillery’s casks via an immutable blockchain. When used with an app, anyone in the world can buy or sell whisky that’s already been filled in a cask. We’re one of the first, and that has helped connect Hanyu Distillery with investors and fans overseas.”

Construction began in 2019, the much-anticipated malt whisky-making began in February 2021. Continuing with the distillery’s concept of “rebirth,” since the company still had the plans, the two Miyake Industries pot stills at the distillery are recreations of the pot stills used by Hanyu Distillery in its past life. The distillery also has state-of-the-art equipment like a Miyake Industries mash tun and stainless steel washback that allows fine temperature control.

Given it’s a newly operating distillery, heading up the distillation staff is Mr. Hideto Shimazaki. He has experience working at the former Hanyu Distillery. “We’re making whisky while referring to notebooks from back in those days, plus my memory. But the scale equipment’s scale and capabilities are different, meaning there’s still some element of trial-and-error. Our goal is making high-quality whisky,” he says.

The distillery is already fully operational, and thanks to crowdfunding in April 2021, there’s also been plenty of press about the rebirth of Hanyu Distillery. While plans were delayed due to covid, the distillery will soon open to tours and offer a tasting space. The distillery has the potential to become a tourist attraction in this “Land of Color,” Saitama.