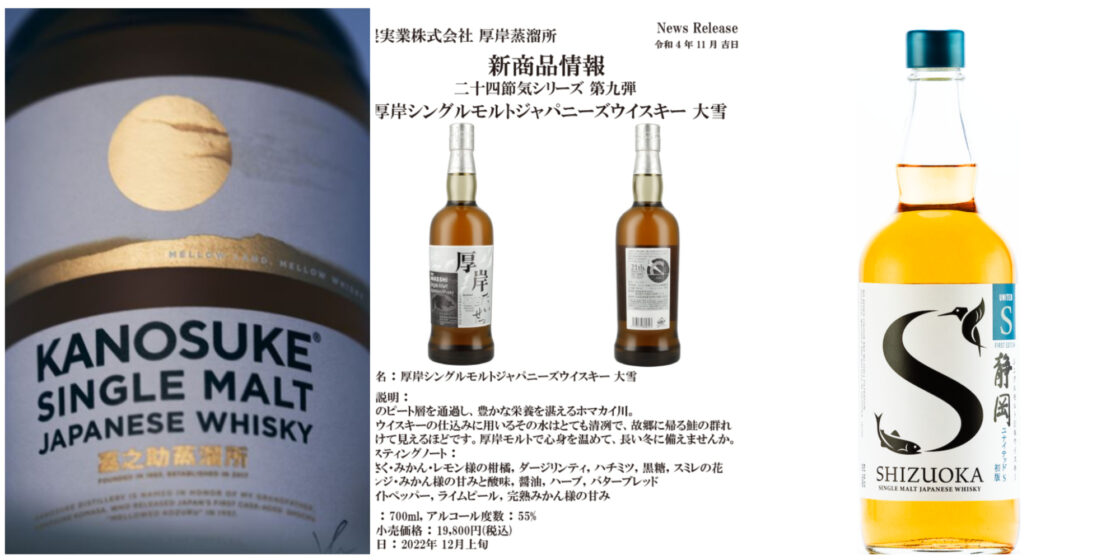 Today we take a look at some recent and upcoming bottles from the Shizuoka Distillery, Akkeshi Distillery, Kanosuke Distillery, and a bonus Japanese gin that uses squid ink as a “botanical.”

Following their last year’s Contact S release, the Shizuoka Distillery is back with “United S.” Once again they’re bringing together whiskies distilled on both their Shizuoka firewood-heated Forsyths still (dubbed “W”) and their ex-Karuizawa still (“K”).

The letter S means quite a lot for the Shizuoka Distillery. Obviously a reference to Shizuoka, but also spirits, single malt, and “sphere.” Sphere because the heavy and strong wood-fired whiskies are balanced with the lighter fruity notes of the Karuizawa-still whiskies.

Just like you can’t be “united” with someone before making “contact,” United S is the successor to Contact S. It uses primarily Japanese malt but also Scottish non-peated malt, peated malt, and even beer malt. For United S, the whiskies were aged mostly in first-fill Bourbon casks, but also wine casks and more.

Looking past the marketing. If you’ve been following the Shizuoka Distillery, you’re probably asking how this is different from Contact S. The abv has dropped from 55.5% abv to 50% abv, but more importantly, Nakamura-san says the blending ratio of the two different distillation styles is now 1:1. According to him, “Single Malt Shizuoka” is finally starting to reveal itself with United S.

Also! The same blog post says the company will continue with the W series and K series releases. So if you’re a fan of one still but not the other, you’ll still have something to look forward to.

I’ve kind of lost count of Akkeshi’s 24 Solar Terms series, but it looks like we’re now up to number nine, “Taisetsu.” Falling around December 8th, it means “great snow” and traditionally signals the arrival of winter. It’s also when people start getting ready for New Years’ celebrations.

Speaking of Akkeshi, it looks they did a private bottling for Hakutsuru for the European market called “Tan Cho.”