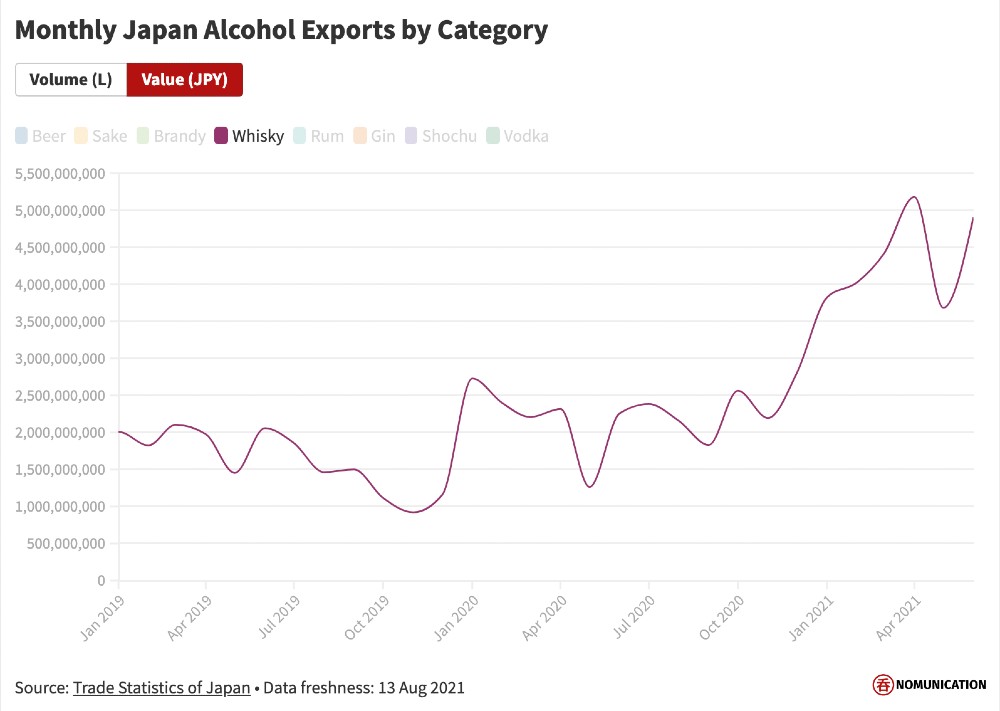 How to invest in Japanese whisky

One of the most common questions I get from readers is, "how can I invest in Japanese whisky?" When some people see how quickly and how much the Japanese whisky category is growing, they may want to try and capture some of that upside.

Certainly, I can understand the sentiment. What many of you don't know is that, here in Japan, I'm a registered sales representative with both the Japan Securities Dealers Association and The Financial Futures Association of Japan. This means I'm legally allowed to sell you stocks, bonds, and all kinds of wacky derivatives. Through an investment brokerage, of course!

That said, definitely don't take this article as investment advice. From an investment perspective, whisky is extraordinarily risky. Are you willing to spend thousands on a product that won't see the light of day for several years, with no guarantee it will even be good at the end? Oh, and your principal literally evaporates.

One thing you won't find in this article is advice about buying individual bottles or cases of whisky. The secondary market for whisky--especially Japanese whisky--is full of scammers and counterfeit bottles. If you're buying bottles in the primary market purely for the purpose of reselling them at higher prices on the secondary market, congratulations, you are part of the problem.

Let's have a look at some of the other options out there.

While the most complex, if you're relatively well-funded, building your own distillery is the most sure-fire way to have access to all of the Japanese whisky you could possibly need. A small craft whisky distillery can be built for around $3-5 million USD, depending on where you want to put it and what kind of equipment you want to put inside.

I recommend getting as much land as you can. You'll need to keep building aging warehouses as you produce new distillate while keeping a certain portion of whisky you've made in the past. While the new JSLMA standards require a minimum of 3 years of maturation for Japanese whisky, realistically, you'll want to keep some stock maturing for decades.

Building a whisky distillery anywhere in the world is a massive undertaking, but in Japan, it's especially difficult due to the language barrier if your Japanese isn't up to par. You'll need to negotiate and present your plans to local governments, townspeople, suppliers, and of course hire local staff to help with the day-to-day operation.

Once you have a site decided, you can begin to set your plan in motion. This includes actually building the distillery and creating a business plan. It needs to include everything you'd expect of a business plan: strategy, marketing, projections, products, and of course financial plans and a budget. You'll need to produce at least 6000L of distillate per year to get a license to make whisky in Japan.

One thing not talked about very often is the experience requirement. The government won't allow just anyone with money to make a whisky distillery: you'll need to prove you have experience actually working in the industry. Many new distilleries fulfill this requirement by hiring an experienced master distiller or training on-site at an existing distillery.

Expect to have to deal with lots of back-and-forth as well as a huge pile of paperwork to make your distillery a reality. Even if the municipality you've selected is enthusiastic about you locating your distillery in their town, the tax agency might not be so. For a timeline, I'd allot two years for your initial planning, finding a site, construction, and finally getting your license. Afterwards, since we're talking about whisky, your cashflow will essentially be next to nothing in your first few years of operation.

If building your own distillery sounds too difficult, acquiring one could be an option in the future.

Most Japanese whisky distilleries are probably not willing to sell out these days. But with all of the new distilleries popping up, we are likely to see consolidation in the future.

If you and/or your partners are legitimately interested in purchasing a distillery, contact me and we can talk more.

Option 3: Launch your own brand with whisky sourced from Japan

This is a relatively new option for the Japanese whisky scene. Since you're not actually making any whisky yourself, you don't need to go through the distillation licensing process. You will, however, need to acquire a license to sell whisky in Japan.

This is very slowly becoming an option thanks to companies like Shiki Shuzo.

The idea here is you find a company willing to supply you with distillate, then go sell it as your own. Perhaps your ultimate strategy is to establish your brand prior to actually building your own distillery.

One thing I don't suggest you do is approach shochu makers and ask them to provide you with aged shochu, so you can label it as Japanese whisky. That's nuts!

If building or buying an entire distillery isn't palpable, it's possible to buy the future rights to the contents of casks being filled by distilleries right now. Here in Japan, we've recently seen cask ownership programs offered by Shizuoka, Kanosuke, Nagahama, Ontake, Niigata Kameda. And back in the days of yore, Suntory and Nikka also offered similar programs.

It's important to point out that, here in Japan, rather than actually buying the cask, you're buying the rights to all of the bottles that come out of a given cask. From a risk perspective, this puts you in a tough position. What happens if the distillery goes bankrupt? What happens if their warehouse is destroyed in an earthquake?

In that sense, it does take a leap of faith and several thousand dollars to purchase entire casks. You don't necessarily have to actually get the whisky though: most cask ownership programs allow the rights to be transferred to another person or business for a small fee.

It's also extraordinarily important to be sure you are dealing directly with the distillery. Do not go through brokers! And definitely don't go through anyone promising you X% returns.

NFTs for Japanese whisky will soon be a reality thanks to Japan-based UniCask, a platform for buying and selling NFTs that represent the rights to 1/100th of the volume of a cask maturing at a given distillery.

Their first NFT, the "Genesis Cask," is tied to a 1991 Springbank cask that will be bottled 20 years from now. Two decades is a long time -- will NFTs still be around then? I don't know, but apparently, it sold out 9 minutes after going live. 1/100th of the 250L cask is, at the moment, 1.08L. In 20 years it will presumably be even less due to angels getting their share (evaporation).

The company has already announced its second cask, and it's from the new Hanyu Distillery.

Much of the conversation about NFTs at the moment is how they're used to represent the rights to a digital asset, say a YouTube video or the first-ever edit on Wikipedia. And plenty of people are making fun of NFTs for that reason, because, well, since the artist still has the legal rights to their creation, what exactly are you buying? What's to stop someone from just downloading the same YouTube video?

A whisky cask NFT, on the other hand, is used to represent the rights to a portion of the contents of a given cask. The cask actually exists--we hope! Single cask whiskies are a thing, meaning the market does recognize that casks aren't interchangeable ("fungible").

If you hold on to your Hanyu NFT until bottling, you'll just get some Hanyu whisky at the end. You can draw parallels between this and physical delivery of a derivative in the traditional finance world (i.e. you buy hog futures and actually get hogs in the future). Hopefully UniCask will figure out how to get bottles to wherever you happen to be when the time comes.

In that sense, how is purchasing an NFT on a blockchain any different from, say, purchasing the rights to some future bottles directly from the distillery?

Apart from containing buzzwords, as far as I can tell, the answer is liquidity. I own the rights to some Saburomaru bottles due to drop next year, for example. But if I wanted to sell those rights now, I'm at a loss as to where or how I would do such a thing. An NFT market could provide a venue for that. What's more, the Hanyu Distillery and UniCask could potentially benefit from the NFT changing hands in the future, taking a percentage of each sale.

Does this mean UniCask itself will act as a market maker, providing liquidity, say, five years down the road? They could do so if they actually own the cask already. In fact, they would have to, if nobody is interested in buying Hanyu NFTs in the future. If Springbank or UniCask goes belly up, or quantum computing reaches a level of maturity making cryptographic encryption useless, you're probably out of luck.

There is another big assumption behind UniCask's whisky cask NFTs. It's that UniCask and Springbank/Hanyu know the best timing to empty their casks. NFT holders can't specify when they can cash in their NFTs for actual whisky. In other words, buyers of the NFT must assume the value of the NFTs will go up (due to longer maturity) despite the actual volume of whisky going down (due to angel's share).

As you can see, I still have some unanswered questions. But NFTs are the new hotness in many ways, so it will be interesting to see how it all plays out in the whisky world.