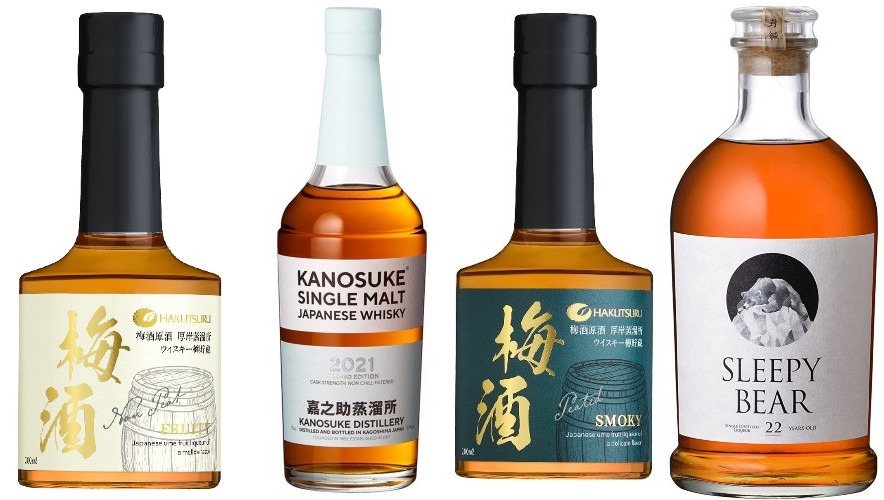 The timing seems right to round up some bottles that will be releasing soon. This time around we have a new Japanese single malt whisky, peaty umeshu, and shochu that's seen the inside of a cask for a couple decades.

On November 12, 2021, less than five months after the release of their first single malt, Kanosuke Distillery will be back at it with the release of Single Malt Kanosuke 2021 Second Edition.

As though your wallet hasn't taken enough punishment this year, 2021 Second Edition here should offer a slightly different experience from 2021 First Edition. The casks that form the base are different.

How are they different?

As we learned from last year's Whisky Galore interview with president Yoshitsugu Komasa, during the distillery's first season, they filled 100 ex-shochu casks, 100 Bourbon barrels, and 30 Oloroso sherry casks. He described the ex-shochu casks as "closer to virgin casks" given the re-char they undergo after holding said shochu. And yeah, "lumberyard" was something I picked up on the nose of First Edition.

The Bourbon barrels, on the other hand, are first-fill casks. In that sense, Second Edition should be a slightly more mainstream whisky, as most distilleries rely primarily on Bourbon barrels for maturation.

The nose is described as citrus, green apples, vanilla, and lemon tea. Then on the palate there's supposed to be honey, cinnamon, and grapefruit. Sweet and easy bitter finish.

Based on that, and as you'd expect from a Bourbon barrel, I'd say it's probably going to be a fruitier and more vanilla experience than First Edition.

I don't know if there's an official English name for these releases or not, but sake old guard Hakutsuru is releasing two kinds of umeshu that were matured in ex-whisky casks sourced from Hokkaido's Akkeshi Distillery. They were sherry casks to begin with, too!

There's a non-peated and peated edition, and since Akkeshi is known for the latter, I'd guess it's the more exciting one. Personally I find usually umeshu cloyingly sweet. But since these are 20% abv--most umeshu is 8-15%--I'd be interested to see how the drink does when it's more powerful and a bit peaty.

Ever had a imo (potato) shochu that's been aged for 22 years? Neither have I! We talked about Satsuma Shuzo's Sleepy Owl release last year, and I have a review of that bottle forthcoming, but in the meantime the company is gearing up to release Sleepy Bear. It ups the maturation to a whopping 22 years. I wonder how far back their experiments go?

As we mentioned with Sleepy Owl, Satsuma Shuzo has their own cooperage. And they have a whisky distillation license too! If there's anyone positioned to release age statement shochu once (and if) that becomes a thing, it's them.