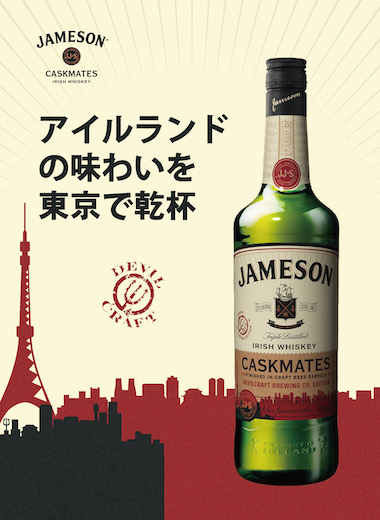 The Caskmates series attempts to bring a slice of the craft beer scene into the world of whisky. Beer is aged in a regular ex-Jameson cask, then, Jameson is once again matured in the same cask. So it goes Jameson->Beer->Jameson.

James Caskmates Tokyo Edition brings an entirely new level of logistical complexity. Jameson is aged in the cask in Ireland, then the cask is shipped to Tokyo, where two different DevilCraft beers are rested — their Imperial Stout and Imperial Rye Brown Ale. Afterwards, the barrels are returned to Ireland, where Jameson is finished once again for 10 months. The two resulting Jamesons are blended together, bottled, and sent back to Tokyo.

Each 700ml/40% abv bottle is around 6,200 yen, I’m guessing around half is just the shipping costs that made this all happen. It will be released on June 4 to bars/industry only.