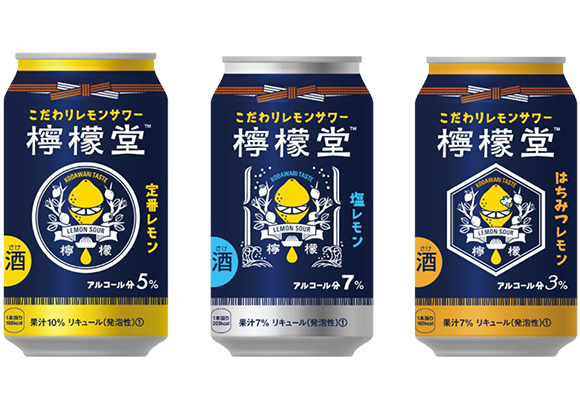 The Coca-Cola chuhais have been officially unveiled! As Coca-Cola’s first alcoholic drinks in its 132-year history, this is one we need to watch carefully. The Coca-Cola “Lemon-Do” series is coming on May 28th.

It’s an announcement we’ve been waiting for since the Coca-Cola Japan CEO dropped that bomb on us in March. The rumors that there would be 3 lemon-based products turned out to be true. As expected, they don’t actually contain any Coke at all. Oh well…

The new chuhai series is called “Lemon-Do,” going for the Kanji for lemon (檸檬) rather than the usual Katakana (レモン). Coca-Cola has taken a cue from “maewari shochu” in making these — basically mixing shochu and water to your preferred ratio, then letting it sit for a few days. Rather than shochu and water though, Coca-Cola takes fresh lemon juice and shochu and lets it steep. They named the technique “maewari lemon.”

There’s three different options with various ratios of lemon juice and alcohol. From left to right in the pic above:

All three will be available only in Kyushu from May 28. Looking forward to giving these a try!