Here’s our November 2021 roundup of bottles we’ve come across that have been released recently, or will be soon.

From the Kyoto Distillery comes Ki No Bai, borne of a fusion of British traditional sloe gin with Japan’s umeshu. Specifically, they’re using haskap berries grown in Hokkaido and Joshuhaku plums from Kyoto, steeping them in a Ki No Bi gin base, then adding sugar beet sugar from Hokkaido.

The company says we should expect the charming acidity of haskap, umami of plum, and softness of Ki No Bi gin.

This seems like a natural progression from the distillery’s sloe gin-type liqueur released back in 2019.

The latest edition of Ichiro’s Malt & Grain is dubbed “Classical Edition.” As the name indicates, it’s aiming for a more “classical” profile.

From the description, it sounds like they’ve amped up the malt component, specifically the peated malt, giving this one a more complex and deep flavor.

A couple of weeks ago, I mentioned how we should expect to see a bottle from the Shizuoka Distillery using whiskies made on both their ex-Karuizawa still and wood-fired direct heated still.

Well, I’ll be damned because that’s exactly what their newly announced Contact S is!

The company says that Contact S will bring together the fruity, light whisky profile from the ex-Karuizawa still and the heavy, lengthier whisky from that wood-fired still.

One question I find myself asking: isn’t this just Prologue K and Prologue W blended? The above specs make it sound like exactly that. We have the same abv and lot sizes (5000 bottles) across all three releases. If you already own K and W, it doesn’t seem like it would be challenging to recreate Contact S by yourself. Or at least get quite close.

Update 2021/10/25: Shizuoka Distillery’s Nakamura-san messaged me to shed some more light on this release. They are indeed using different casks for Contact S, so it’s not as simple as just combining the two Prologues. As a result, it ought to have a different profile from both of the previous releases.

In the future, I would expect most of the official Shizuoka single malt releases to combine whiskies from the two different stills. In that sense, Contact S might provide a more accurate picture of the future versus Prologue K or W.

From Sakurao B&D comes a navel orange liqueur based on their quite fantastic and affordable Sakurao Gin, adding Hiroshima-grown navel oranges. They’re steeped in the gin, and then it’s redistilled to yield this liqueur.

And presumably quite a lot of oranges! The abv on this one is 23%.

Look for this one come November 1 as well. At 1650 yen after tax, it’s affordable enough to buy to try. 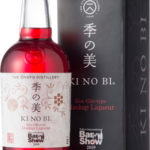