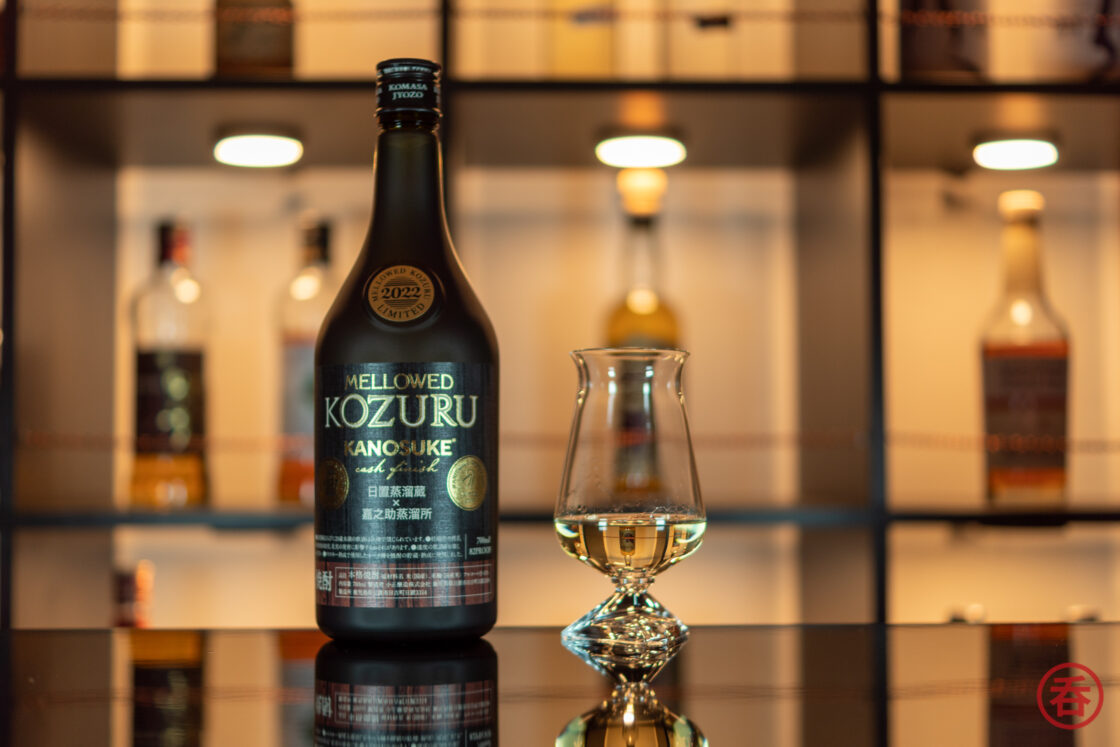 The worlds of shochu and Japanese whisky collide again to bring us “Mellowed Kozuru Kanosuke Cask Finish,” a shochu aged in Kanosuke’s whisky casks. Things are getting pretty meta down in Kagoshima because Kanosuke whisky itself is famously aged in ex-Mellowed Kozuru casks. If you’re confused, read on.

Once upon a time, a gentleman named Kanosuke Komasa pioneered aging shochu in oak casks, releasing “Mellowed Kozuru” in 1959. His company, Komasa Jyozo, continued to use his techniques and became a household name in shochu. Now fast-forward five decades. His grandson and current company president Yoshitsugu Komasa is struggling. Struggling because he’s trying to sell shochu outside of Japan, and it’s just not working.

Per the Kübler-Ross Change Curve, that struggle progresses to frustration, depression, experimentation, decisive action, and finally, integration. That’s evident with Komasa Jyozo. Komasa-san determined that for shochu to go toe-to-toe with other spirits on the world stage, he needed first to turn heads with whisky. He launched the Kanosuke Distillery in 2017.

And he’s turned plenty of heads since then. World Whiskies Awards. Investment from Diageo’s Accelerator, Distill Ventures. Tokyo Whisky & Spirits Competition. The accolades keep rolling in. It’s no secret that I’m a fan.

Paying respect to his roots, much of the Kanosuke whisky stock is aged in casks that were previously used to age Mellowed Kozuru shochu.

That brings us to today. Komasa Jyozo shows that they’ve entered the “integration” phase. We have before us Mellowed Kozuru aged in ex-Kanosuke whisky casks. Now, I don’t know for sure they held Mellowed Kozuru before that, but I suppose anything is possible.

While doing this review, I’ll be comparing this to the single cask Mellowed Kozuru I reviewed a couple years ago.

Palate: The fruitiness continues. We add peach, vanilla, a gentle oak, and a handful of spices.

Finish: The oak draws things to a close with a hint of pepper.

That fruity, mellow element of Kanosuke whisky shines through, but it’s certainly not a traditional shochu as it’s tough to find the koji influence in this one. It’s also not the first time shochu has been aged in ex-whisky casks, and it’s definitely not the last.