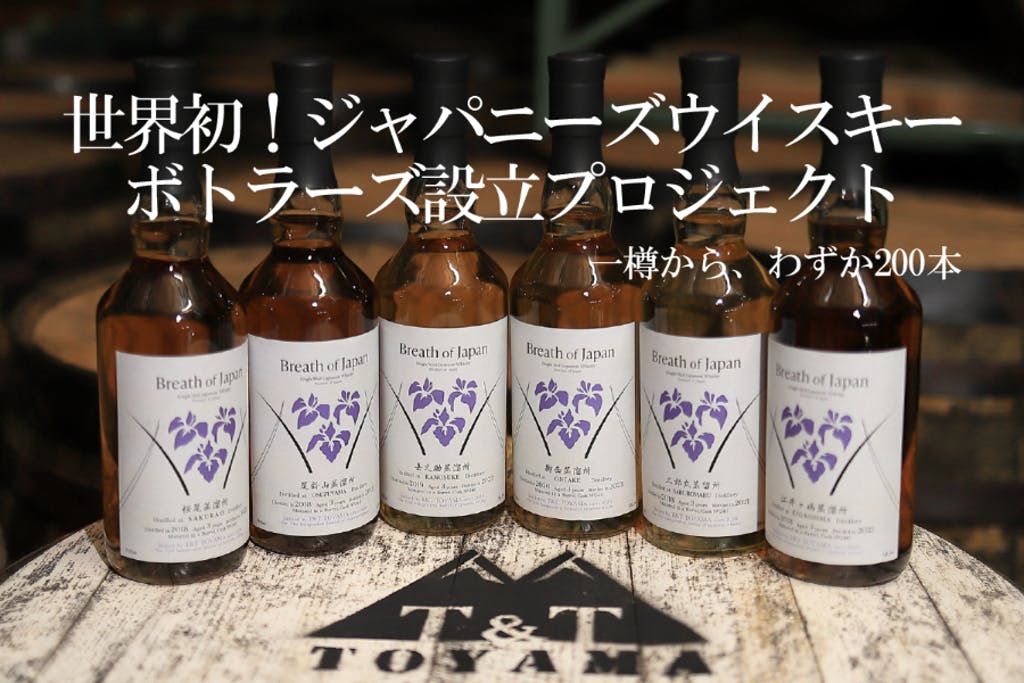 Japanese whisky is adding yet another chapter to its rapidly changing history: the (arguably) first ever independent bottler of Japanese whisky, T&T Toyama, has launched a crowdfunding project over at Campfire to much fanfare.

Any regular reader of nomunication.jp is aware of the sheer quantity of Japanese whisky distilleries that are popping up basically every month these days. Not only has Japanese whisky become Japan's #1 alcohol export in terms of value, the quantity being produced is expanding rapidly. Today we welcome a new independent bottler to Japanese whisky.

What is an independent bottler?

What if someone were to buy up a bunch of casks of Japanese whisky from different distilleries, then do their own aging and blending? That concept has been around in Scotland since 1842 with the establishment of Cadenhead's. Such companies are referred to as "independent bottlers," and you've probably already heard of big independent bottlers for Scotch such as Gordon & MacPhail, Hunter Laing, and Signatory.

The company is already negotiating purchases of casks with the above distilleries, plus more are apparently in the works. They plan to begin construction of their warehouse in October, and putting casks into it by April 2022. The first bottles should hit the market in 2025 at the earliest.

Why go through an independent bottler when the distilleries sell their own bottles?

One of the key aspects of independent bottlers is that they usually provide some kind of value-add for consumers. They can do the following, for example, which the distillery may not do on their own:

The final two points are what T&T Toyama has highlighted as their value-adds, at least for now. The crowdfunding page explains that they plan to shave ex-Bourbon casks, then toasting rather than re-charring them. It may not be up to the level of S.T.R. but it could bring a new level of depth to the above whiskies. Plus, there's the location: T&T Toyama's casks will be aged in Inami, Toyama.

Is this really the first Japanese whisky bottler?

Given that such companies have been around for so long already outside of Japan, you might ask: why are we only seeing this happen now, in 2021? The answer there is mostly because Japanese whisky hasn't really needed independent bottlers. Suntory and Nikka grew huge whisky businesses in Japan on their own, with large distilleries able to produce a huge variety of whiskies internally. Prior to the establishment of Chichibu, "craft Japanese whisky" (as we know it today) didn't really exist. Plus, there's the high legal hurdle of needing a distillation license to even bottle whisky, which is a different can of worms.

Even so. When we look at the bigger picture of Japanese whisky history, you could easily argue that Japan has come pretty damn close to the concept of "independent bottlers" in the past. Ichiro's Malt Card Series, for example, happened because Akuto-san's Venture Whisky bought up the remaining casks of Hanyu Distillery to save them from being lost to history. And would Karuizawa Distillery be as legendary as it is today were it not for Number One Drinks? Even outside of Japan, That Boutique-y Whisky Company did a Japanese Blended release too.

In case you're wondering where the new JSLMA standards fit into this, the answer is that assuming the independent bottlers do their maturing, blending, and bottling in Japan--as T&T Toyama intends--their products can be dubbed "Japanese whisky."

Anyway, up until mere weeks ago, the concept of swapping stocks between whisky distilleries in Japan basically didn't exist. That's to say, up until now, essentially all whisky produced by a given Japanese whisky distillery was produced, aged, and bottled by the same company.

And just like that, today we have the "first" independent bottler for Japanese whisky. Needless to say, the Japanese whisky scene continues to develop at a breakneck pace.