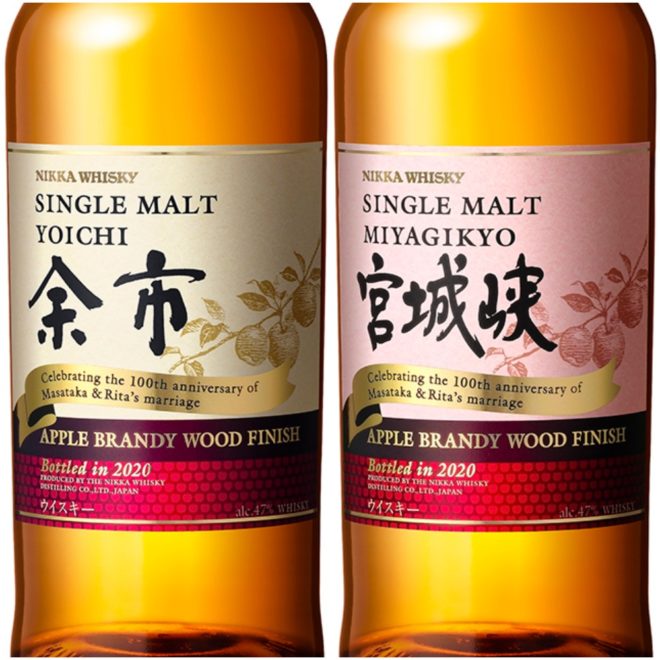 To commemorate the 100th anniversary of the wedding of Nikka founder Masataka Taketsuru to Rita Cowan, Nikka is launching Apple Brandy Wood Finish editions of their NAS Yoichi and Miyagikyo Single Malts.

Taketsuru-san got hitched while he was over in Scotland learning how to make whisky. The precise date is January 8, 1920, making 2020 the couple’s centennial wedding anniversary.

As we learned from Taketsuru-san’s autobiography, one of Dai Nippon Kaju’s first products was an apple juice using Yoichi’s famed apples — kaju is Japanese for “fruit juice.” It didn’t sell very well, but was enough to keep the company afloat while they got their whisky operation underway.

The company would later go on to sell apple wine and brandy, as they still do today. In fact, 2000’s 80th anniversary of Taketsuru and Rita’s marriage was celebrated with a 30-year apple brandy dubbed “Rita.”

For the 100th anniversary, whisky is now getting an apple brandy treatment.

Both are NAS whiskies. They go through the same maturation process that you’d find behind a normal bottle of Yoichi or Miyagikyo. However, after that’s done, they spend a further six months in casks that were formerly holding apple brandy for 28+ years.

Nikka says that for the Yoichi, we should expect the ex-apple brandy cask finish to harmonize a mellow sweetness with a deep peatiness. On the nose there’s a sweet aroma of apple compote alongside maltiness, then the palate brings savory sweetness of baked sweets like apple pie and fruit cask. The finish closes with slight peat and lasting malt sweetness.

For the Miyagikyo, the apple brandy cask finish brings together bright sweetness and a soft depth. The nose features the chill woodiness of a cask while remaining sweet and lively. On the palate we get fresh juicy apples and bittersweet fruit cake. That is followed with a finish of slightly bitter and sweet cask, then spiciness of cinnamon.

To assure we get the maximum punch from the ex-apple brandy cask finish, Nikka also tells us these are non-chill filtered.

Over the years we’ve seen plenty of whatever-cask-finish NAS single malt bottlings from Nikka. But I would say that this is perhaps the most Nikka-ish yet.