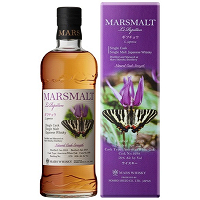 This time around we have a whisky distilled in January 2013, aged for six years in an American white oak cask, then bottled in April 2019. No tasting notes are available, or at least I have not found any yet. But Musashiya says it is lightly peated. At 6 years, it’s matured for significantly than other recent entries in the series.

Like the last release that dropped out of seemingly nowhere, L. japonica here simply popped up at a handful of stores over the past week. Musashiya managed to wrangle a few bottles, but they are already sold out, for 12,960 yen.

L. japonica is also known as the Gifu butterfly, named after the prefecture where it was discovered in 1883.