Looking at the Gin & Tonic first, the base spirit is a blend of a twice-distilled no-name gin and Suntory’s Roku craft gin. No, they didn’t give the ratio. That’s mixed with a lime-infused spirit — they do the same thing for their Kokushibori series — and topped off with tonic. Look closely and you’ll find that it doesn’t actually contain any lime juice? I guess we’ll just have to wait and see just how limey the infusion turns out.

The Moscow Mule is a tad more simplistic, as it uses a twice white birch-filtered vodka made from Japanese rice with a spicy ginger kick. This one does contain 1% lime juice, so perhaps it could fare a bit better when you’re getting smashed at 2AM in front of the 7-11.

Pre-mixed cocktails definitely aren’t anything new. And they’re usually “meh” at best. But when Suntory does them? Who knows! It’s not their first attempt, with this same brand, even. “The Cocktail Bar” originally launched in 1993. This time around Suntory has hopefully learned more about distilling their own liquor, so it’s probably worth a try at least. My G&Ts or Moscow Mules tend to be around 14% abv though… hopefully these don’t turn out to be too sweet. We’ll see. 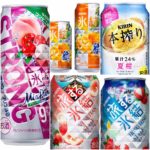