Following after Nikka Black Blender’s Spirit and Nikka Black Crossover, this Nikka Black Aromatic is the third and final limited-edition release of Nikka Black in 2017. Like its predecessors it is essentially a special edition of Nikka Black, itself Nikka’s answer to Suntory’s everyman whisky, the Kakubin.

How is it special? Inside it’s a blend of Miyagikyo malt–some 20yo sherry casks, Coffey grain, and Coffey malt. It’s the fruitiest of the three releases, according to Nikka. Like the other limited releases, this is meant to appeal to a 20-30yo audience with limited experience in whisky (a.k.a., me). Considering the shortage of their single malts, Nikka needs more products for this audience to bridge the gap.

The company has been successful with this series judging by online reactions. The highly rated Blender’s Spirit has more than doubled in price since release, now going for around 4000 yen per bottle. Crossover has remained around the 2000 yen price point. While we’ve known about it for months, Aromatic here has finally debuted on November 21 for around the same. So look to spend another 500-1000 yen over a bottle of regular Nikka Black, though considering this is a limited edition, that may change quickly.

The deep red translucent bottle  gives you an idea of what to expect: it says “Fruity & Sweet” right on that label. On the nose there’s a lot of sort of breakfast fruitiness to it, oats, bananas, oranges plus honey.

In the palate there’s that soft sweetness of the Coffey grain coming through nicely. But it gives way quite quickly to a dried malty flavor, which was a tad sharp. Make no mistake, this is a primarily young whisky.

Nikka describes the finish as “slightly bitter with sweetness of fruits and cookies.” While I did find the cookies I found they fade out quite quickly, again revealing the (lack of) maturation.

Interestingly, Nikka is recommending you drink this one on the rocks or as a highball. I tried both and found the rocks to be much better — the ice helps take away some of that bitterness in the palate. And to be fair that’s how a lot of Japanese young people assume you should be drinking whisky!

All in all another solid offering from Nikka that hopefully doesn’t get too expensive too quickly. At 2000 yen it’s a no-brainer, but at 4000 yen I’d have to think it over.

Rating: B
Buy from Amazon Japan 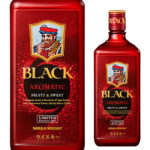 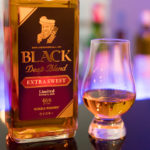