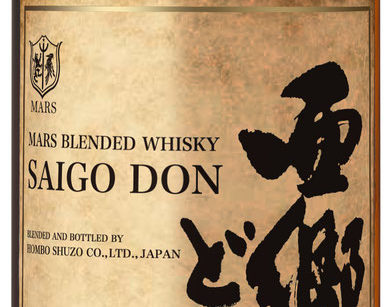 2018 is the 150th anniversary of the Meiji Restoration in Japan. The event marked the end of the rule of the Tokugawa shogunate and restoration of power to the Emperor, in this case Emperor Meiji. The Meiji government would go on to rapidly modernize and Westernize Japan’s economy and military over the coming decades. That ultimately didn’t really end well for a lot of people…

But we’re here to talk about whisky. Mars Whisky has a new whisky coming April 14 named Saigo Don, a blended whisky out of the Mars Tsunuki Distillery. No details of the blend are available at the moment, nor has this whisky been officially announced by Mars, but we do know that it’s supposed to be a pretty big and malt-forward whisky yet also with a tender side. At 2500 yen pre-tax for a 700ml bottle, it’s also one of the more affordable options from Mars Whisky too. 40% abv.

Since the whisky is to commemorate the 150th anniversary of the Meiji Restoration, it’s only going to be sold this year. “Saigo Don” also happens to be the name of the currently-running NHK taiga drama that follows the life and times of samurai hero Saigo Takamori, nicknamed “Saigo-don,” Kagoshima-speak for Saigo-dono. He’s a legend of the Meiji Restoration and sort-of real-life version of Ken Watanabe’s character in that Tom Cruise movie. I’m assuming the NHK version is a slightly more realistic portrayal!