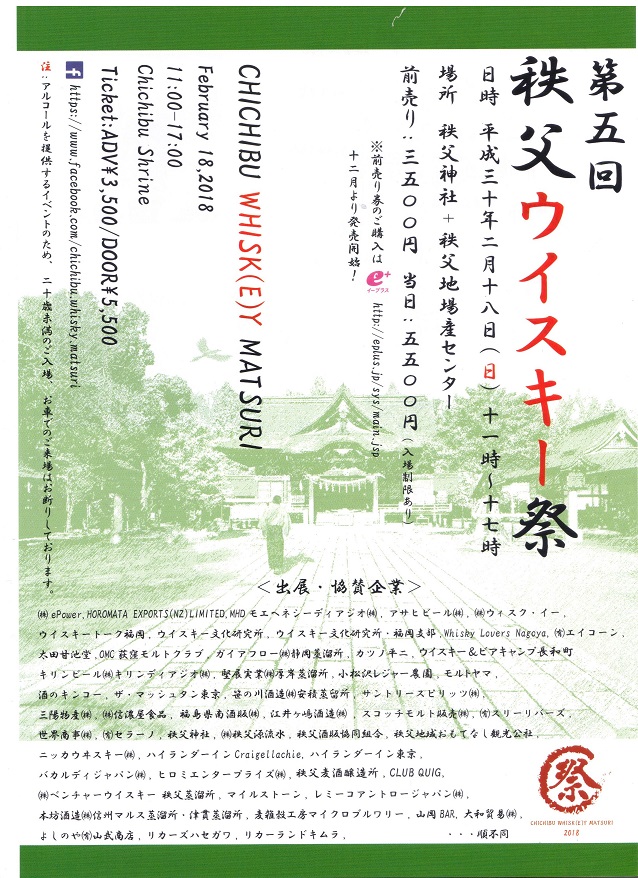 Yes, it’s time to start thinking about Chichibu once again. Next year’s Chichibu Whisk(e)y Matsuri 2018 is scheduled to happen on February 18, 2018.

Now in its fifth year, the annual Chichibu Whisk(e)y Matsuri has a similar setup as last year. It’s once again being held at the Chichibu Shrine on a bitterly cold Sunday in February from 11AM to 5PM. Advance tickets are slated to go on sale from December 1st at a handful of bars in Saitama and Tokyo, or online at e-plus (the e-plus details are expected on November 24). Advance tickets are 3500 yen while door tickets are 5500 yen.

Details of the seminars have not been announced but we do know that private tours of the nearby Chichibu Distillery will be happening again on the day prior, February 17. Leaving every hour on the hour from 10AM until 3PM, each tour accommodates just 20 people. Competition will be fierce as the Chichibu Distillery is ordinarily not open to the public for tours. The tours are only open to Chichibu Whisk(e)y Matsuri advance ticket holders for an additional 2500 yen, which includes the round-trip bus ride. Further details of seminar tickets and tour tickets will be announced later.