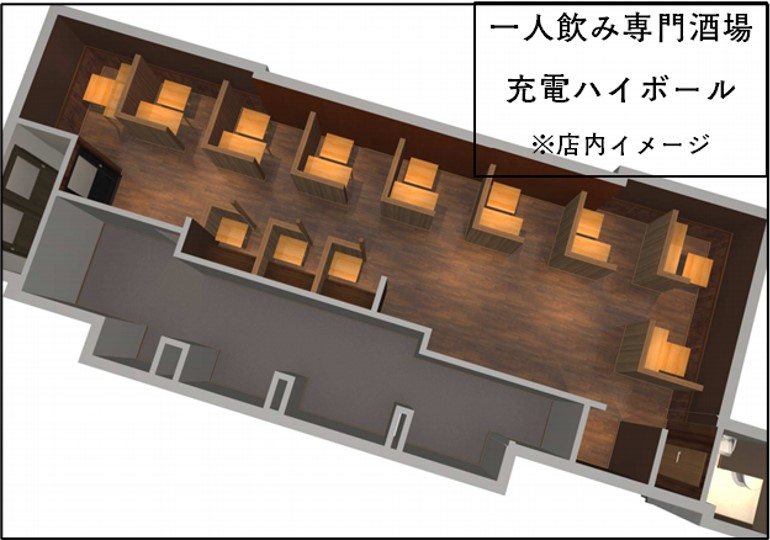 Hakodate, Hokkaido is the location of what could be very well be the future of going out to drink in Japan: an izakaya with only single-person booths and low human interaction.

Covid-19 has forced many businesses to rethink their operating models. Perhaps no sector has been harder hit than hospitality, though: the objective is, often, interacting with other people in close proximity while drinking.

What if we removed the human component? A company called “Cultivate” has just announced the opening of an izakaya that throws most of that human interaction stuff out the window. It’s called “Recharge Highball” and it opens on February 5, 2021 in Hakodate.

All of the seats in the izakaya are halfway-private booths with seating for only one. To order, you’ll use a touchscreen panel in each booth. There’s also WiFi and a power outlet at each seat, so it could be a decent place to join one of the many, many online nomikais happening these days.

Of course, izakaya aren’t the first kind of establishment to get one-person-only booths. The “hitori” (one person) trend has been going for decades already in Japan. Ichiran Ramen did it with ramen way back in 1993. Yakiniku Like did it with yakiniku. Wankara did it with karaoke.

So while this setup may be COVID-19-friendly, the “doing something alone” trend in Japan predates the spread of the virus. Drinking is next. A HotPepper Gurume survey showed a stunning 47.7% increase in the number of female respondents between 2015 and 2018 surveys interested in drinking alone at bars.

Cultivate says that Recharge Highball is designed to help prevent the spread of COVID-19, but it’s also a way to lower the hurdles to drinking alone.Ha