Suntory’s flagship beer brand in Japan is The Premium Malts, and since 2015 they’ve been selling their super-premium edition called “Master’s Dream.” Master’s Dream is made using triple decoction and Diamond malts from the Czech Republic.

This new Yamazaki Barrel-Aged Master’s Dream won’t be sold in stores. Instead, Suntory is running a contest from October 27 to November 30 to win one of 1000 bottles (715ml, 8.5% abv).

To enter the contest, access the new website and sign up for the MASTER’S DREAM Club mailing list during the above period. There’s a survey as well, but it doesn’t appear you need to buy anything. Note that the contest is only open to residents of Japan.

Good luck! And yes, of course I’ll be entering the contest myself. 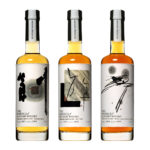