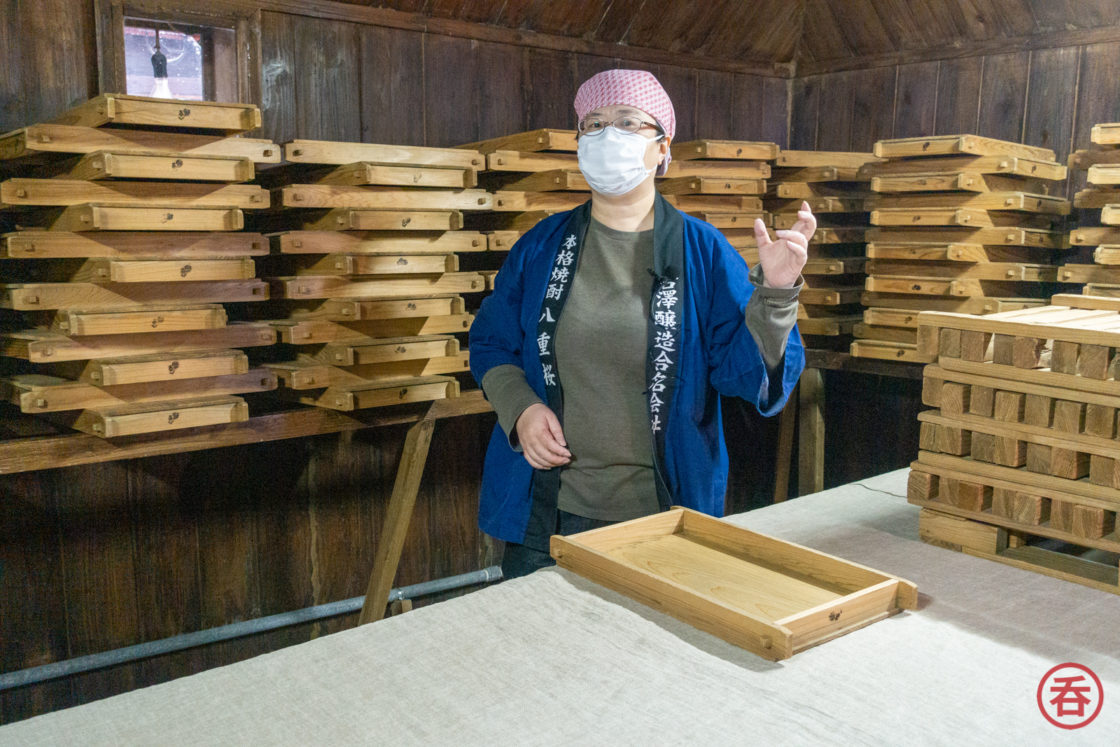 In Nichinan and nearby Kushima in Miyazaki prefecture, there are 13 different distilleries making shochu. But the Furusawa Distillery is the only distillery in the entire prefecture still making it in its original building, dating back to 1892.

Tradition is a word that gets thrown around a lot when it comes to shochu, as many distilleries are family-owned and operated. And they’ve been that way for several generations. At the Furusawa Distillery, fifth-generation owner and toji Masako Furusawa was born and raised in shochu.

But it wasn’t until she was older that she realized the rarity of being both female and owner/toji of the distillery. She says that it seemed entirely natural for her to take over as the eldest of three daughters, following her grandmother, mother, and father (second, third, and fourth-generation owner/tojis). 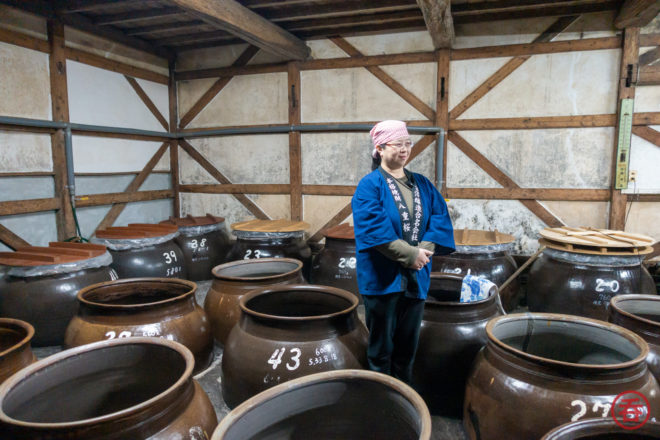 The Furusawa DIstillery is the only shochu distillery in Miyazaki prefecture still housed in its original mud-walled buildings. Those buildings are designated national Important Cultural Heritage sites. There’s a 30cm layer of rice husks between the inner and outer walls, meaning the temperatures inside are kept just suitable for making koji and fermentation. Or at least the temperatures were just right — Furusawa-san explains that if it gets hotter, they may have to shift towards using climate control.

Making koji. The Furusawa Distillery still does it traditionally, in its original koji-making room. Most shochu distilleries have done away with making koji using these trays (called kojibuta) because doing so requires intense manual labor. You don’t just sprinkle some spores on rice and call it a day — you need to move the trays around within the room every few hours. And making koji takes like 40 hours! While the Furusawa Distillery has a more modern option for making koji, Furusawa-san says that creates koji that doesn’t quite have enough kick to it. When they want something with a hand-made character, they go all manual in the koji room.

Over to fermentation, you’ll notice that, like many shochu distilleries, Furusawa’s ceramic washbacks (to borrow a whisky term) are mostly buried. This again helps regulate temperature, assuring whatever is going on locally temperature-wise is reflected in that year’s shochu. 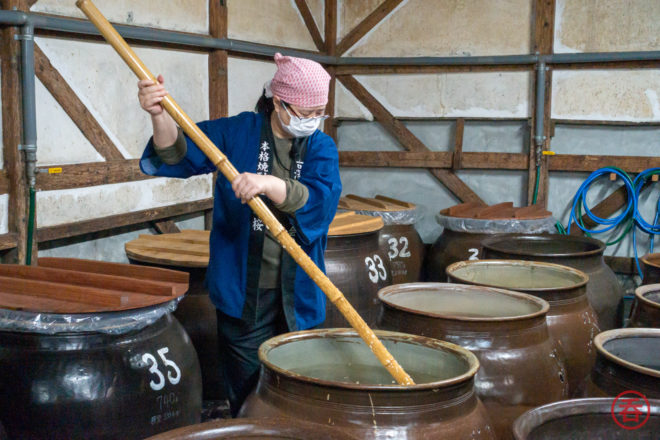 Since its founding in 1892, the Furusawa Distillery has used the same ceramic pots for fermentation. Distillation is just once, and it’s atmospheric rather than a vacuum distillation. Since distillation happens in the winter, the company doesn’t need to use any mechanical chill filtering; instead, fusel oils that rise to the surface get scooped away. And just like in the old days, the Furusawa Distillery still matures their shochu in ceramic urns. 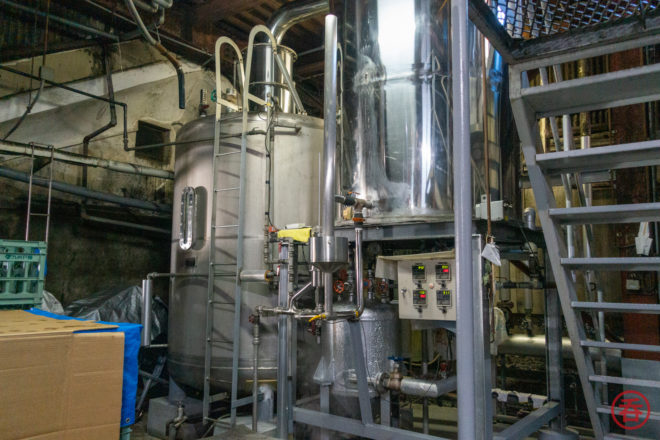 Of course, the company isn’t opposed to innovation. In 2009 they added an aging warehouse built entirely from local cedar. Over the years, the company produced sake, mirin, rice shochu, and barley shochu, but now they primarily focus on sweet potato shochu. Here’s to hoping they can continue their traditions for generations to come. 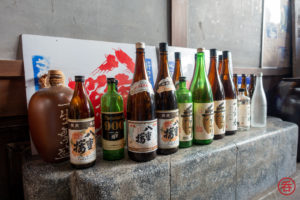 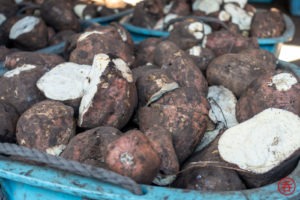 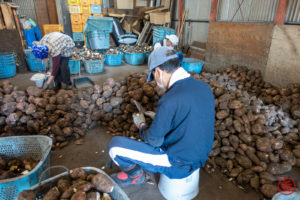 Potatoes are hand-processed to remove impurities 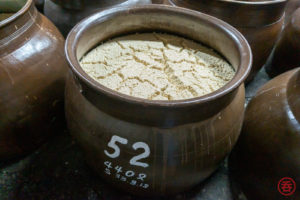 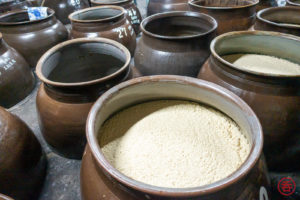 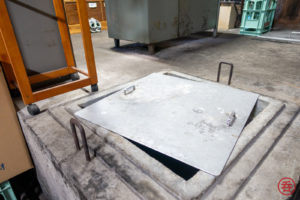 Rather than a spirit safe, the Furusawa Distillery has a spirit trap door 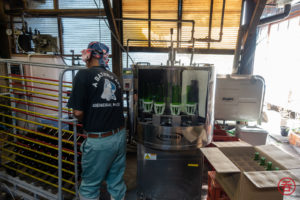 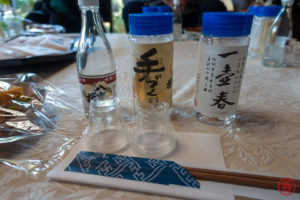 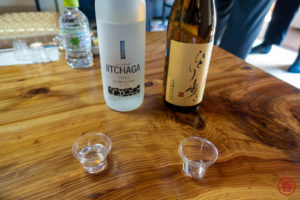 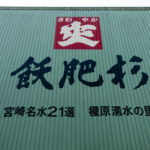 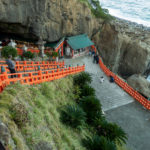